Hitler’s Empire – How the Nazis Ruled Europe by Mark Mazower 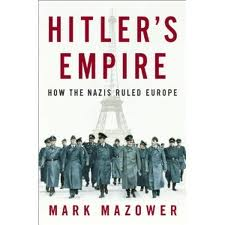 (3. – 635.) Hitler’s Empire – How the Nazis Ruled Europe by Mark Mazower – A comprehensive examination of Nazi actions behind the lines during and after their conquest of Western Europe and far into Eastern Europe. From politics through administration through industry through agriculture through movements, often forced, of people through distribution of food Mazower examines Nazi rule.
He starts well prior to WW II. There was ethnic cleansing in both Germany and Poland after WW I with active persecution on both sides of the border.

The Germans sought to increase the number of Germans in border areas while forcing out Poles. There was a systematic effort in the newly created Poland to push Germans out of their properties and marginalize and make life difficult for them. Hundreds of thousands of Germans left Poland. Yet they did not swell the eastern German population for hundreds of thousands of Germans also moved to western Germany from eastern Germany.
When the Nazis came to power in Poland and vast areas of Eastern Europe through conquest a far more ruthless and comprehensive plan was enacted in the East with regard to the Slavs.
It did not matter what the economic consequences were for Germany. For Nazi leadership the War in the East was a racial war. Jews were to be eliminated. Almost 2 million Russian prisoners of war were allowed to die of starvation or disease. The remaining Slavs were effectively to become German slaves. It was a brutal and horrific approach.
Once in power there were efforts to Germanize populations. As part of the process the Reich brought back 800,000 ethnic Germans from German speaking areas outside Germany.
The process of Germanization began in the Czech Republic. It did not happen as quickly as the Nazis anticipated. Even the amphibians (individuals with Czech and German parents) were slow to choose to become German.
In Poland there was a far more coercive program to Germanize the area. Over 600,000 farms were seized from Polish farmers in the Warthegau, one of the areas of western Poland annexed by Germany, and some 500,000 ethnic Germans settled in the area.
Still there were far too few clearly German people to populate the areas taken in the East. Hundreds of thousands of partially German Poles were identified as eligible to be re-Germanized to move forward in the goal of Germanization. Only when attempts at colonization further east descended into chaos and fierce resistance did efforts to Germanize lands cease during the war.
It was chilling to read the plans to Germanize huge areas in Eastern Europe when the war was over. It was clear to those residing under German occupation that the Holocaust against the Jews might very well be extended to them.
Germany was not alone in ethnic cleansing during WW II. Its Allies eagerly expelled hundreds of thousands of people both from their existing territory and acquired lands. In support of Magyarization thousands of Serbs and Romanians were forced from Hungary. Pursuing the dream of Greater Bulgaria saw Bulgaria send thousands of Greeks out of northern Greece. Romania pushed some Ukrainians from the southern Ukraine and made a major effort to rid Romania of gypsies.
In their racial war the genocide of the Jews was the primary goal of the Nazis. In killing Jews they most successful in the East. In Poland and the U.S.S.R. they killed the vast majority of Jews. From Western Europe they sent many thousands of Jews east but were somewhat restricted by governments making the issue of Jewish deportation a matter of national sovereignty. The Reich’s Allies (Italy, Hungary, Romania and Bulgaria) also limited their co-operation.
Overall, Nazi governance was dysfunctional. Within the Reich there were Hitler’s personally appointed Gauleiters, a new form of aristocracy. They were his local equivalent following his personal approach to governance. Trying to carry out their regular government functions were the existing civil servants. Competing with both civil administrations was the ever expanding SS. There were no cabinet meetings of German ministers after 1938.
In Western Europe the Nazis made huge demands on the occupied lands for manufactured goods and food.  Only Denmark, which had not resisted German invasion, was treated differently. At the same time Goring was thwarted in seizing control of Western European companies by the German industrial establishment working with their counterparts in Belgium, the Netherlands and France.
The Nazis made sure Germans were fed better than any other Europeans. In the West rations were tolerable. In the East most were on the edge of starvation.
The Rule of Law creates stability. Hitler despised laws and lawyers. A revolutionary at heart he considered the law to whatever he decreed.
Before reading the book I had not understood the depths of German exploitation, cruelty and murderous actions in the lands east of Germany after conquest. I better see the reasons for the fury of the Russian onslaught on Germany.

While the Nazis recruited thousands of young men in Western Europe eager to fight the Bolsheviks the racial policies of the party prevented it from gaining the hundreds of thousands of soldiers it could have gained from Poland, Belorussia, the Ukraine and the Baltic states. Only when defeat was looming did they bring Slavs into their armies.
They could have had important additional allies join the war such as Spain and the Muslims of the Middle East but Hitler would not commit to sharing conquered lands with them.
Opposition to the Germans was muted except in the East where Nazi oppression left the Poles and Russians with little to lose by armed resistance. In Western Europe it took the brutal drives for workers being sent to the Reich to provoke real resistance. Even then attacks were limited.
The Nazis could have relieved their shortage of workers without dragooning foreign workers by bringing large numbers into the industrial work force as occurred in England, Canada and the U.S. While not discussed by Mazower, ideological considerations favoured keeping women in the home. Once again the Nazis rigid emphasis on its principles meant chronic worker shortages persisted and opposition grew quickly.
In dealing with opposition the Nazi adoption of vicious reprisals, killing large numbers of civilians, in response to attacks maintained a sullen peace in Western Europe. There were no “hearts and minds” campaigns by the Nazis. Violent responses to resistance actions gradually produced stronger resistance groups.
Mazower sets out the consequences for Germany losing the war. As the Allies smashed into Germany there were 4.8 million German deaths in the last 9 months of the war against 2.8 German dead in the first 4 ½ years of WW II.
When the war ended the nations of Eastern Europe, led by the Soviet Union, conducted the largest ethnic cleansing in European history forcing millions of Germans west out of their countries. These Slavic nations, having seen how the Nazis exploited the presence of ethnic German minorities and how these Germans acted during the war, were determined to ensure there would never be future ethnic German enclaves in their countries.
Mazower’s far reaching look at Nazi rule in Europe emphasized to me, probably more than any other book, how Hitler’s concepts of German national superiority and the racial superiority of Western Europeans and hatred of the Jews governed, not merely guided, his empire. As Ian Keegan demonstrated in his biography of Hitler all decisions flowed from Hitler. Even when his principles were contrary to the best interests of Germany economically or militarily or politically Hitler never wavered. Had the Reich won WW II Europe would have been a grim continent with all decisions made for the benefit of Germany. Europe would have been used to serve Germany.
It is an excellent work of history. Mazower skillfully explains what happened in Europe behind the front lines. (Jan. 15/12)
(On Saturday I will discuss the actions of two European families I have met with regard to the issue of resistance to Nazi occupation.)
Posted by Bill Selnes at 8:56 PM