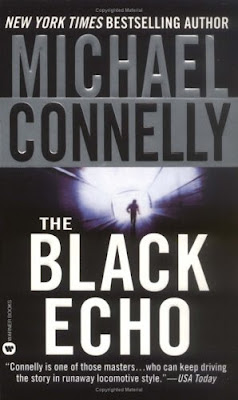 
I have always thought of Bosch as a big guy. Instead, he is “a few inches short of six feet and was built lean”. His size is consistent with him being a member of the American Army tunnel rats in Vietnam.


“Out of the blue and into the black is what they called going into a tunnel. Each one was a black echo. Nothing but death in there. But, still, they went.”


It is little wonder that Bosch is still affected by his service in Vietnam.


His bleak life as a child in foster homes is touched upon in the book.


As the book begins Bosch is called out to investigate a body found in a tunnel on the Mulholland Dam in Los Angeles. He is startled when he recognizes the deceased as Billy Meadows, a fellow tunnel rat, who has struggled with heroin addiction since coming home.


All present at the scene are content to conclude Meadows died of a self-injected heroin overdose. The meticulous Bosch refuses to accept the easy solution. By carefully examining the body, the tunnel and the apartment of Meadows he determines it was murder.


When Bosch makes a connection with an unsolved bank heist he contacts the FBI and meets agent Eleanor Wish. It is a frosty first contact in her office.


Bosch riles fellow officers and other government agencies with his investigation. We meet Deputy Commissioner, Irvin Irving, who wants Bosch, clearly not a team player, out of the police force.


Bosch had nearly been fired for his actions during the Dollmaker serial killer investigation. IAD, frustrated he was merely demoted from the elite Robbery Homicide Unit, is pursuing Bosch hard for evidence that would get him off the force.

Bosch has a partner in Jerry Edgar but is barely concerned whether Edgar even keeps up with him in the investigation.


In Bosch’s world there are no coincidences. He looks for information linking the bank job with Meadows death. Bosch and Wish become an unlikely team working the cases. Connelly creates an inventive and credible method of attacking the bank.


As they gradually close in on the killers Connelly displays his ability to build tension. As with most Connelly books I found myself racing to the end.


I thought the solution was alright but it was not as good as the balance of the book.


On Saturday I will be posting thoughts on how Harry Bosch has evolved as a character between Black Echo and The Drop. (Mar. 30/12)
Posted by Bill Selnes at 9:57 PM