Blessed are the Dead by Malla Nunn 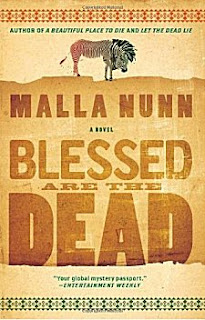 35. – 667.) Blessed are the Dead by Malla Nunn – Every year a special author or two renders me grateful to be a reader of mysteries. Earlier this year L.R. Wright with The Suspect was such an author. This summer I am glad to have found Malla Nunn.

In a departure from my usual reading I start with the third in her series involving South African police Detective Sergeant Emmanuel Cooper and Detective Constable Samuel Shabalala. It is 1953 and apartheid controls South African life.

They are assigned to investigate a murder at Roselet, a village on the edge of the , a few hours away from .

On their arrival they find the deceased, Amahle, is the beautiful 17 year old daughter of the local Zulu Chief, Matebula. Their first challenge is to gain access to the body located near a path on a foothill to the mountains. A Zulu impi (fighting force) bars the way. It takes a combination of diplomacy and assertion of the rights of white domination to get by the Zulu warriors.

They find a body with no obvious cause of death. There is a thumbtack sized wound in the back.

Shabalala, displaying impressive tracking skills that reminded me of Napoleon “Bony” Bonaparte, quickly determines the body has been moved there after death.

In Roselet, they find the officer, Constable Desmond Bagley, in charge of the local detachment curiously disinterested in the murder.

They seek the aid of Dr. Margaret Daglish in determining the cause of death but she is unwilling to conduct any examination of the body. She allows them to move the body into a cool cellar until a doctor can come from .

There is a moment when a small shiver goes down my back as Shabalala speaks to the spirit of Amahle. While Cooper professes not to be superstitious he has his own voices from WW II.

During her life Amahle has been reluctant to reveal herself:

“Keeping your true self hidden from others isn’t a trick,” Emmanuel said. “It’s a sacrifice”.

With the locals uncooperative and volunteering no information Cooper and Shabalala settle in for the investigation.

Pressing on they determine that Amahle was a maid for the Reed family, the most prominent farmers in the valley. The Reeds continually flout their superiority as members of the English ruling class.

An adjacent farm is owned by Boer, Sampie Paulus. The Boer neighbours are clearly resentful of the English Reeds.

At the Matebula kraal the mourning is mixed with tensions over the economic consequences of Amahle’s death. She would have demanded a huge bride price payable to her father.

Cooper works easily with Shabalala. While pragmatically accepting the rigid race distinctions Cooper lacks overt prejudice. His youth amidst the different races of Sophiatown has made him far more egalitarian than most white South Africans. In our post-apartheid era it is shocking how completely the white population dominated black South Africans.

The beautiful valley between the sharply rising foothills is an important part of the plot.

Nunn creates a mystery that combines the era, the geography and people of of the early 1950’s. The mystery could not have been set in a different place and time.

I appreciated her judicious use of Afrikaner and Zulu words. There are enough to give the flavour of the community but not too many to need a dictionary.

The process of detection involves traditional skills (tracking as mentioned above), science, skilled questions and an understanding of community and culture.

Nunn describes Cooper’s ability to do more than interview:

“The doctor was ready to talk and he was there to listen. In this lifting of burdens lay the unspoken beauty of police work.”

Blessed are the Dead is a brilliant book. I will soon be returning to the lives of Cooper and Shabalala.

I thank Hannah Conlin at Simon & Schuster for sending me the book. (Aug. 4/12)