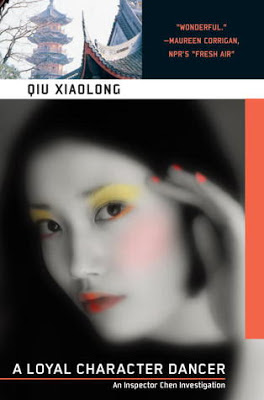 A Loyal Character Dancer by Qiu Xiaolong – In the second Chief Inspector Chen Cao mystery the Inspector starts his connections with .

The book opens with the start of an investigation into the death by axe of a man whose body is found in the in . Before he can proceed Chen is abruptly summoned by Party Secretary Li and assigned to find Wen, the wife of an important witness in an American prosecution of the leader of a major human smuggling ring. She has disappeared from her home in . The Communist Chinese government of the early 1990’s, in a rare display of co-operation with the , has undertaken to find her and ensure she travels to .

Chen is directed to work with U.S. Marshall, Catherine Rohn, in finding Wen and keeping her safe until she can fly out of .

Chen would prefer to investigate the apparent triad murder in the Park but accepts it is his duty to undertake the new assignment. Beyond his swiftly rising status within the police his English language skills make him a logical liaison for Rohn. She has also gained the assignment partly because of her language proficiency. She speaks Chinese fluently.

While ostensibly given wide authority to conduct the investigation, Chen is further directed to keep Rohn occupied in . Clearly the Party does not want Rohn roaming seeking information on her own.

Needing to know why Wen has disappeared Chen dispatches his colleague and friend, Yu, to . Chen has concerns over the efforts of the local police.

Wen is a resident of because of the consequences of Mao’s Cultural Revolution. As a teenager she was sent to the countryside to work with the peasants and be re-educated. There is a striking poem within the book about her when she was a beautiful teenager departing from the he is performing the only acceptable dance of the era, a loyal character dance. The poem's author remembers:
Life was harsh for Wen in the country. Various circumstances, including marriage, keep her in after the end of the Revolution. After two decades her beauty has faded and she endures from day to day.

As Chen expected Yu soon finds the police have made but perfunctory efforts to find Wen. Yu determines she received a phone call in the village from her husband in warning her to flee. The pregnant Wen leaves the village.

Both Chen and Rohn have concerns about the security of their police organizations.

Chen, while recognizing there are international consequences if Wen is not found, must tread delicately. Triads are involved. Their influence has penetrated throughout the restaurants and clubs of and is reaching into official .

Chen uses past connections and establishes new links to gain information. Rohn occasionally provides unexpected insights. (They have an unusual relationship by Western fiction standards. They do not sleep together immediately after meeting.)

At the same time Chen quietly looks for information related to the Park murder.

The mystery is an insightful journey through a booming Chinese economy filled with new capitalists but also full of traditions. Chen and Rohn face dangers, sometimes more subtle than in the West, as they move forward.

Chen often quotes Chinese sayings and poetry. They add imagery uncommon in crime literature. Considering the transitory nature of our lives, he quotes a poet:

Life is like the footprint left by a solitary crane in the snow,
visible only for one moment, and then gone.

Xiaolong’s talents as a poet as well as a writer of a prose infuse the book with rhythmic grace. I look forward to reading the next in the series. (Oct. 22/12)

This will be my second post for the letter "X" in the 2012 Alphabet in Crime Fiction meme hosted by Kerrie Smith at Mysteries in Paradise.