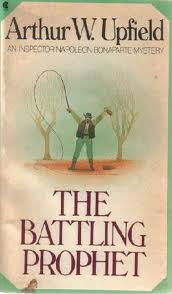 The Battling Prophet by Arthur W. Upfield (1956) – I am going to have 2 entries this week for “U” in Kerrie Smith’s meme, The Alphabet in Crime Fiction. See her blog at Mysteries in . My next post will be a further profile of Arthur W. Upfield.

In The Battling Prophet Bony takes a vacation, leave in his parlance, in the state of on the near to . He arrives at the farm of John Luton in response to a letter from concerning the death of ’s friend Ben Wickham. Bony decides to take 10 days off to go fishing with and figure out what happened to Wickham.

Wickham had gained considerable notoriety for his talents as a self-taught meteorologist. He asserts he has discovered how to predict the weather from his study of 40 years of weather records. Governments and the establishment had scoffed at his claims. When he correctly predicted a severe drought and farmers started following his advice there is growing interest in and outside over using his forecasts.

refuses to accept the official cause of death – heart failure because of alcoholic poisoning. and Wickham had been on one of their periodic epic benders but says his friend did not die from their overindulgence in spirits.

is a vigorous 84 and Wickham an equally active 75. In their younger days they had been bullock drivers together in the outback driving teams of 26-28 bullocks hauling huge loads.

While they do not drink to excess often they still have multi-day, even multi-week, benders. Usually they will confine their drinking to a single type of spirits. On this bender they have been drinking bottle after bottle of gin.

Before Wickham’s death they had decided to end the bender. From long experience they had learned they needed to have periodic small drinks to reduce the effects of delirium tremens. Every few hours they would have a drink.

It was shortly after one of these drinks that Wickham had died. Beyond his personal conviction that his friend’s heart would not have succumbed to drink, has the most creative analysis for finding murder I may have read.

is sure Wickham did not die from the D.T.’s, hoo-jahs in their words, because, at his death, Wickham was not displaying the type of hoo-jahs that come from drinking gin.

“When we boozed on whiskey, the things we saw sort of grew before our eyes. When we blinked, they didn’t vanish, but stayed on the table, on our knees, wherever they happened to appear and grow like roses on a bush. Following a spell on rum, the things appear suddenly and vanish suddenly after playing around like they wanted to bite you. The gin hoo-jahs is still different. You see them out of the corner of your eye. They always stalk you from behind, and when you turn to look at ‘em, they aren’t there. Understand?”

Just prior to perishing, Wickham was seeing things on his legs and feet and laughing at them. Those were not the gin hoo-jahs.

is positive that government or commercial interests who dislike Wickham’s weather work have reason to want him dead.

The local doctor, police and minister have been dismissive of . Bony, while not specifically agreeing with , decides to see what reaction his presence provokes in the community.

When he lets word filter out there is an immediate response by all areas of officialdom that is capped by directions from his superior in distant to return to his home.

As Bony probes the reactions to his unofficial investigation become more dramatic.

It is a good, not great, mystery. Some of the forces against Bony are not really credible but it was interesting to see Bony dealing with a different kind of murder.

It is the first time I have read a Bony mystery that did not include involvement with aboriginal people.

“I was found beneath a sandalwood tree, found in the arms of my mother, who had been clubbed to death for breaking a law. Subsequently, the matron of the Mission Station to which I was taken and reared found me eating the pages of Abbotts’s Life of Napoleon Bonaparte. The matron possessed a peculiar sense of humour. The result – my name. Despite the humour, she was a great woman. Aware of the burden of birth I would always have to carry, she built for me the foundations of my career. My entry to the Queensland Police Department came about after I had won my M.A. at the , …..”

I continue to enjoy the series and have found it does not really matter that I am not reading them in order. Bony is a keen observer of humankind and a tenacious police officer. He will not let go until he resolves a case. (Oct. 6/12)