The Truth Can Get You Killed (1997) by Mark Richard Zubro 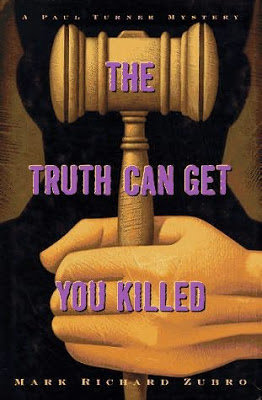 45. – 677.) The Truth Can Get You Killed (1997) by Mark Richard Zubro – Paul Turner is a Chicago Police Detective in Area Ten who happens to be gay, widowed (from his wife’s death) and the father of two teenage sons (one in a wheelchair because of spina bifida).


On New Year’s Eve Paul is enjoying an evening out with his lover, Ben, at Au Naturel, a hot hot gay bar, featuring barely clad young male dancers. More interested in each other Paul and Ben return home shortly after midnight.

It is bitterly cold the next morning when Paul and his partner, Buck Fenwick, are assigned to investigate the murder of a middle aged man whose body has been found in the back alley adjacent to Au Naturel.


The victim is Federal Court of Appeal Judge Albert Meade, a staunchly conservative jurist, who has recently gained attention for a ruling favouring a local anti-gay ordinance.


Initially, Paul is concerned about being perceptions of bias. He is worried a conviction of the killer might be jeopardized because he, a gay man, is investigating the murder of a homophobic judge. It is an interesting twist on how L.A. detective, Mark Fuhrman, was pilloried as an untrustworthy police officer in the O.J. Simpson murder trial because of some racist comments unrelated to the case. Paul’s commander sees no reason to remove him from the case.


Considering the location of the body, Paul and Buck wonder if the deceased judge was a closeted gay man. As they go forward they are met by a gay wall of silence. There is a strong reluctance in the gay community to talk about any man who wants to stay in the closet, even after death.


Buck has some difficulty understanding why there are a significant number of gay men in the late 1990’s who remain in the closet.

Paul, who does not hide his orientation but does not make it overtly public, does his best to explain there are many gay men afraid of the consequences of being out in their families, at work and in the community.


When sources place the judge in Au Naturel on New Year’s Eve the gaydar of the detectives is tingling. As they move forward they find perception and reality are not always the same.


The fears of gay men wanting sexual relationships but afraid to be open are explored throughout the book. Members of the gay community who are totally out are not always understanding of those still in the closet. The book explores a challenging gay issue without becoming a polemic. In my last post, a profile of Zubro, there are comments from Zubro on introducing gay issues into his mysteries.


Paul and Buck have a deft, sometimes witty relationship.


Paul becomes the first gay detective I have read parenting a pair of boys on his own.


Reading the Russell Quant series by Anthony Bidulka a decade later is to see a far more open gay detective though the issues of the closet remain very real as explored in Flight of Aquavit.


It is a good book. I appreciated the author telling his story in 211 pages. I regret to say I would not have read this book if I was not looking to read “Z” author so I could profile the author in the 2012 Alphabet in Crime Fiction meme. I am going back to the library to read another Paul Turner mystery.
This will be my last post in the Alphabet in Crime Fiction meme hosted by Kerrie Smith at her blog, Mysteries in Paradise. Six months have gone swiftly by. Thank you to Kerrie for setting up the meme. Next week I will have posts about my author profiles for the meme.
Posted by Bill Selnes at 8:05 PM