The Bone is Pointed (1938) by Arthur Upfield 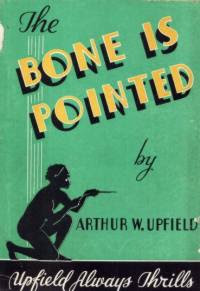 The Bone is Pointed (1938) by Arthur Upfield – In the vast spaces of western a small station is the Gordon place of 300,000 acres. Their neighbours, the Lacey’s own the huge Karwir station.


The Gordons have taken upon the unusual role of protecting and offering a place to live to the Kalchut tribe, a group of about 60 aborigines. They have shielded them from de-tribalization by governments and missionaries. The Kalchuts are amongst the last tribes in living a traditional lifestyle.


Jack Anderson, a stockman for Karwir, disappears while checking fences during a rare heavy rain. The local police investigation is unable to even determine if he is dead let alone whether he has been murdered. Many suspect the Kalchuts as has brutally assaulted two members of the tribe and never faced criminal charges. At the same time all acknowledge that he was disliked by almost everyone in the area of .


Napoleon “Bony” Bonaparte is summoned some months later to undertake a new investigation. Heedless of time he advises he will take months if necessary to determine what happened to .


His knowledge of tracking and keen skills of observation are well described by Upfield. Yet Bony also embraces modern science. A microscope is used in the analysis of evidence.


As he patiently determines the facts those involved in ’s disappearance grow more worried that he will fulfill his prideful statement that he has never failed to solve a case.


An interesting aspect of the book for me was the role of rabbits. For the first time in my reading I specifically learned of the problems caused by the exploding rabbit population in rural and how the people coped with them.


At the heart of the book is the interaction between the half caste Bony and the Kalchut. He dresses, talks and lives the life of white Australians though only reluctantly accepted by them. Were he not an obviously gifted investigator he would be marginalized. At the same time he remains attached to his maternal aboriginal origins. He is conflicted about his mixed blood. While proud of his skills from his aboriginal ancestry he sees white society as the modern way.


The title refers to a traditional aboriginal method of punishment. Barely more than witchcraft for most whites “bone pointing” is a terrifying and real to aboriginal Australians. The power of the mind is potent.


The language of the book will make current readers cringe on occasion in how aboriginal people are looked down upon and crudely dealt with by white Australians. I do not see it often in crime fiction but there was a female character just as prejudiced as the men.


It was clear to me as I read the book that Upfield had respect for and appreciation of aboriginal people and culture. Subsequently, in Arthur William Upfield – A Biography by Travis B. Lindsey I read from a letter Upfield wrote to J.K. Ewers at the time he wrote the book in the late 1930’s about his intentions with the book:


I set out to write a readable book having much aboriginal law centred around the ancient boning of a human being. The more anthropologists of repute study the Australian abo. the further they are mystified by the origin of the race, and the more clearly do they come to think that the race was highly developed when the white and yellow races were human gorillas. I know that the general idea of the abos., based on the Bulletin drawings and jokes is that they are half-wits, and here I have tried to make people understand that the reverse is the truth.


As with most books in the Bony series it could not have been set anywhere else but . The plot is so closely tied to the land, the weather, the people and the cultures of the outback.


It is the best book I have read in the series. It is both psychological and physical with a subtle interplay between mind and body. (Jan. 20/13)

****
My earlier posts on Arthur Upfield and his books are: