mystery author, Anthony Bidulka, is having an exciting spring though winter is still strongly entrenched in .

Earlier this month his book, Dos Equis, was nominated on the shortlist for mysteries for a Lambda Literary Award. With his usual style Anthony exuberantly celebrated the nomination on his fine blog.

It is the second nomination for Anthony. In 2004 he won the award for his second book in the Russell Quant series, A Flight of Acquavit.

The criteria for the mystery category are:


Novels, novellas, and short story collections that adhere to the criteria of a“mystery,” as defined by the Mystery Writers of America: “A mystery is considered to be any novel in which a crime, or a series of crimes, are an integral part of the story.” Anthologies are not eligible.


The finalists for gay mystery are:


4. on the Mountain: A Dan Sharp Mystery, Jeffrey Round, Dundurn


He is already excited about the awards ceremony in on June 3. It is a special year for the Lammy's as it is their 25th anniversary. 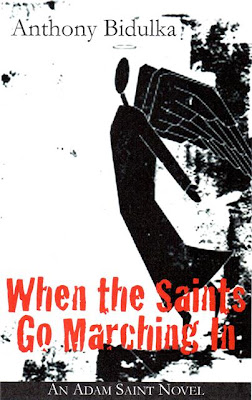 Anthony is not going to have much time to get there as on June 1 he is having the release party for the first book, When the Saints Go Marching In, in his new series featuring disaster recovery specialist Adam Saint.


Each of his Russell Quant books has had an overflowing book launch party at the McNally Robinson bookstore in .


Wanting a party but with a change, Anthony is hosting a two hour come and go party at McNally Robinson on the Saturday afternoon. Being Anthony it would not be a party without food and drink. He assures readers there will be complimentary wine and cheese for the “entire” two hours.


During the come and go party he will be signing books except for a 15 minute interview session with two interviewers of Saskatoon. Readers can send in questions for the interviewers to ask Anthony.


I expect a long line of book buyers. At the launch for Dos Equis Sharon and I decided to go for supper at the restaurant next to the bookstore rather than stand in line. After spending over an hour at supper there was still a line of book buyers getting their books autographed. It was much shorter. Overall Anthony spent over 2 hours signing books.