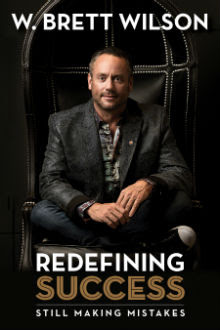 1. – 690.) Redefining Success – Still Making Mistakes by W. Brett Wilson – An inspirational autobiography by Brett who was born 5 years later than myself 300 km away in North Battleford, Saskatchewan. He graduated with a degree in Engineering from the University of Saskatchewan and moved to Calgary at the beginning of the 1980’s.

He soon entered the world of finance and, in the early 1990’s set up FirstEnergy, a merchant bank for the oil industry. Unlike traditional regular and merchant banks it concentrated on helping small oil companies be financed and raise money.


Brett was immensely successful in business but at an equally great cost to his personal life. He recounts his limited involvement with his children and the erosion and collapse of his marriage. As his personal life faltered he was diagnosed with prostate cancer.


As the 20th Century ended he re-evaluated his life and priorities. Too late to save his marriage he re-established good relationships with his children. He took the time needed to treat his cancer. He re-balanced the time spent on work, family, friends and community.


Brett is among the few writers of business autobiographies and biographies to emphasize integrity is at the heart of his business deals. Striving for good deals he is not desperate to extract the last dollar out of every transaction.


Ask anyone in the Calgary corporate community and they’ll tell you: if you want to hire a trustworthy person who understands that a hard day’s work earns a fair wage, just hire someone from Saskatchewan.


In his investments he hearkens back to an earlier era of business. He invests more with the people seeking his money than the numbers they present to him. I was reminded of famed American banker J. Pierpoint Morgan who said character was the most important asset in considering a loan.


In Canada he is best known for the 3 years he was a panelist on the Canadian edition of the T.V. series, Dragon’s Den, where real life business moguls evaluate pitches for investment from fledgling businesses and sometimes invest in those businesses. During his years on the show Brett was the most positive about ventures and made more investments than any other Dragon.


It can hard to evaluate whether a writer is truthful about their life. I do know one of the businesses in which Brett invested as a Dragon. He did make a fair deal. In his description of the investment in the book he did not over-state the facts. He provided an accurate picture of the investment and what has happened since he made the investment.


Even rarer is his business commitment to philanthropy. When Brett and his partners set up FirstEnergy they decided to donate 2.5% of the firm profits to charitable organizations. They have maintained that principle through the years.


In his personal life he has creatively raised millions of dollars. One of his favourite means to raise money is to host a party for which he pays all the expenses and then invites friends, colleagues and other members of the community to provide a cheque at admission for his charity of choice for the event. He asks them to provide what they would pay for a good meal and consider adding something more. Individual parties have raised hundreds of thousands of dollars.


I was probably more impressed by his personal commitment. He travels almost every year to Mexico to physically help build houses for poor Mexicans in the Baja region.


Brett believes all students should be taught classes in:


1.) Marketing – “Understanding the value of brand, goodwill and the purchasing decision-making process is an invaluable competitive advantage over others, even when it comes to preparing your own resume and business card”;


3.) Philanthropy – “I fundamentally believe that giving back is an opportunity to change the world you and your family live in, to improve the brand of your business, to invest in the future”.


My only regret in the books is the lack of examples of business mistakes from which he has learned. He provides significant illustrations of his personal mistakes. I wish he would write another book on his business mistakes and what he learned from them.


Few people can match his passion and energy. All readers could benefit from a personal re-definition of success. (Jan. 6/13)
Posted by Bill Selnes at 6:40 PM