“U” is for Death of a Swagman by Arthur Upfield 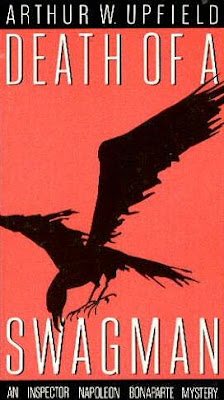 "U” is for Death of a Swagman by Arthur Upfield (1945) – For the letter “U” in the Alphabet in Crime Fiction meme being hosted by Kerrie Smith at her fine blog, Mysteries in Paradise, I am posting a review of a Napoleon “Bony” Bonaparte mystery by the Australian author, Arthur Upfield.


It is another Bony mystery set in the vicinity of a prominent Australian geographic feature. Death of a Swagman takes place in and around the Walls of China in the southwest corner of New South Wales. On the opening page Upfield describes the area:


The colour of the country is reddish-brown, and upon this reddish-brown land the soft fingers of the wind built a wall of snow-white sand some twelve miles long, three quarters of a mile wide, and several hundred feet high.


In The Will of the Tribe the Wolf Creek Meteorite Crater in Northwest Australia had been featured in the book. 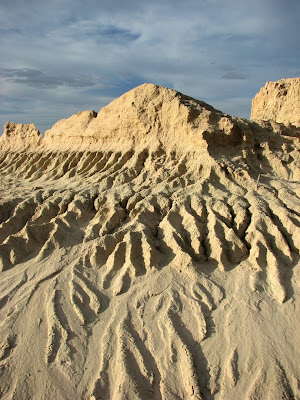 death of swagman, George Kendall, at a hut adjacent to the Walls of China. Where modern crime fiction perpetually emphasizes the importance of the first 24 to 48 hours after murder in conducting the investigation Bony is unperturbed about arriving weeks later.


For this investigation he chooses to slip into town as a stockman, with the name of Robert Burns, looking for work. Only after being arrested as a vagrant does he reveal his official status to Sgt. Richard Marshall of the local police detachment. Bony consents to a sentence of 10 days in the local jail during which time he will paint the police compound fence, whitewash the cells and have the chance to talk to the residents as a casual stranger rather than a police inspector.


There are interesting local characters led by Mr. Jason, a former Shakespearean actor, who owns the garage. Merino is so small he is also the Justice of the Peace dispensing justice, the town undertaker carrying the deceased to the cemetery in a spectacular hearse and presiding over the coroner’s inquest.


Among the touches that mark the book as set almost 70 years ago is the role of tobacco. Almost everyone smokes. Bony does a lot of thinking while rolling his own humpbacked cigarettes. The community times how long it will take Mr. Jason to exhale great draughts of pipe smoke.


The ever shifting sands of the Walls of China are at the heart of the detection of the book. Bony’s skills as a tracker are evident throughout the story. It is a physical art lost to all but a few current detectives. My next post will compare the trackers of the past and the present.


What modern detective could discern that faint straight lines in sand showed a clever killer was covering his tracks by using a flail for the wind creates curved lines in the sand. Only man produces straight lines.


There is also a fascinating explanation of the use of noughts and crosses or X’s and O’s to provide information.


Bony is always professional in his investigations. He sets out the problem with emotional involvement by the police:


Many young detectives, and older ones too, are too liable to the emotion of indignation because of a brutal killing. They accept such a crime as a personal matter and so permit their judgment to be clouded by animosity towards the killer.


Would that the fictional police of today avoid the righteous indignation that fuels so many of them?


The book differs from earlier Bony mysteries I have read in having a strong child character. Little Rose Marie is a spirited and clever girl.

The strength of the book is in the investigation. Unlike The Bone is Pointed or The Will of the Tribe or The Bushman Who Came Back it does not venture into the relations between white and aboriginal Australians. As always there are some passages that will make a contemporary reader cringe but I accept them as a reflection of that era.


While the solution ventured into the bizarre I enjoyed the book. I find Bony a remarkable character.
****
My earlier posts on Arthur Upfield and his books are: