"W" is for Guilty Addictions by Garrett Wilson 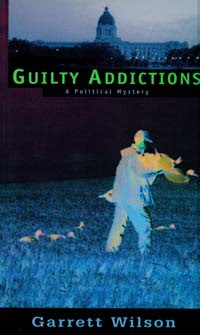 For this week's post in the Crime Fiction Alphabet hosted by Kerrie Smith at her blog, Mysteries in Paradise, I have chosen for "W" the book, Guilty Addictions, by Garrett Wilson.

My review written in 2002 long before I began blogging and when I was writing much short reviews:


41. - 131.) Guilty Addictions by Garrett Wilson - The long time lawyer has written a fictional version of the Conservative Party's legislative funds scandal of the late 1980's. Oxford Lacoste is a young rural lawyer seeking to unravel the fraudulent scheme which turns murderous as he pursues the truth. The plot is sound and characters well drawn. (It is exciting to have a rural lawyer as the hero.) Unfortunately, too much of the writing is predictable and cliched. Paperback only (Dec. 27/02)
Readers from outside Saskatchewan will not understand the real life background to the book referred to in my review. No one needs to know that information to appreciate the book.

I wish I could have liked the book more. Who could be better as a hero than a rural lawyer? Who could be better as an author than a Saskatchewan lawyer. Unfortunately it was not good as I hoped. Others may like it better.
Wilson has led a rich and varied life since he was born in 1932 in Limerick, Saskatchewan. He practised law in Regina for over 50 years. He has been a long time prominent member of the Liberal Party. He served in Government in different capacities including a period as Chairman of the Public Service Commission. He was involved in the sport tourism industry and has his pilot's licence. He had a 2,000 acre farm for over 20 years.
His volunteer activities as outlined on his website are extensive:
As well, Garrett is a former director and president of the
Saskatchewan Book Awards and a former director and presently
a member of the Advisory Council of The Writers’ Trust of
Canada. He currently serves as a public representative on the
Saskatchewan Hearing Committee of the Investment Industry
Regulatory Organization of Canada, and on the Prairie Regional
Council of the Mutual Fund Dealers Association of Canada.
Other memberships include The Writers Union of Canada, The
Saskatchewan Writers Guild, the Canadian Aviation Historical
Society, The Saskatchewan History and Folklore Society,
Heritage Saskatchewan, and the Royal United Services Institute.

I do not where he has found the time but he is also the author of 6 books and editor of a pair of memoirs. His life makes me think I must have wasted a lot of time in mine.

While Political Addictions was not a great book for me I am happy to say my next post is a review of one of his non-fiction books, Diefenbaker for the Defence, and it is an outstanding book.

****
My connections to this week's post could not be stronger with the author and lead character both being Saskatchewan lawyers.
Posted by Bill Selnes at 11:14 PM