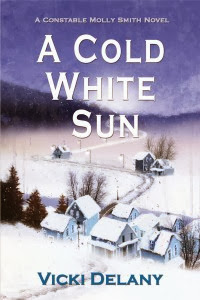 A Cold White Sun by Vicki Delany – Trafalgar, British Columbia schoolteacher, Cathy Lindsay, is out for an early morning walk with the family dog, Spot, on the first day of the spring school vacation. As she briskly strides down the path on the edge of the mountain near her home she is struck down by a single shot fired from a shotgun behind her. Constable Molly (Moonlight) Smith answers the call and finds Lindsay dead in the snow.


There is no obvious suspect. Lindsay does not have any apparent enemies. Life at home with husband, Gord, was tolerable. Colleagues generally like and respect her. She is neither a community activist nor politically active nor involved in any protest movements. There is no activity in which she is engaged that created animosity.


For Smith, Sergeant John Winters and the other members of the police department it means a long hard investigation looking into the details of Lindsay’s life. They will have to search for a piece of evidence to lead them to the killer.


In her personal life Smith has been reflecting on her relationship with boyfriend, Constable Adam Tocek of the local RCMP (Royal Canadian Mounted Police) detachment. They have been living comfortably together. Has the time come to make it permanent or is it time to move on?


Smith is adjusting to the new relationship of her mother, Lucky Smith, with the town’s Chief Constable, Paul Keller. Smith’s father has died a few years ago and she realizes her gregarious mother is bound to establish a new relationship but she finds herself not ready for her mother to have a sexual relationship.


Trafalgar is a small community. As the police probe information comes from personal connections as much as from formal interviews.


The police learn that Lindsay was very interested in math teacher, Mark Hamilton. Publicly he has shown no interest her. Of interest to the police is his military background. Before becoming a teacher he had been a soldier in the Canadian army and served in Afghanistan. Could there have been a personal as well as a professional relationship?


The police examination of Lindsay’s family is painful. Gord is confused and disorientated by the death of his wife. Daughter, Jocelyn, normally a bubbly 10 year old is devastated by the death of her Mom. Son, Bradley, a sullen teenager cannot figure out what to feel about his Mom being gone. On an ordinary late winter morning their lives have changed completely and they cannot understand why.


Frustration grows as the police struggle to find leads. Lindsay has had an average life.


Delany skillfully portrays the family lives of the police and other characters. It is not a mystery in which the characters lead solitary lives. Her characters deal with the daily challenge of family relationships.


Delany does equally well in evoking the central B.C. setting of the book. The weather and geography are essential parts of the book.


In the combination of family and mystery I was reminded of the Joanne Kilbourn series of Gail Bowen. I am drawn to reading mysteries in which the characters have real families in clearly defined settings.


The end is startling. I did not see it coming.


The sixth Smith and Winters mystery is the first I have read. I will be reading more of the series. (Nov. 23/13)
Posted by Bill Selnes at 11:56 PM