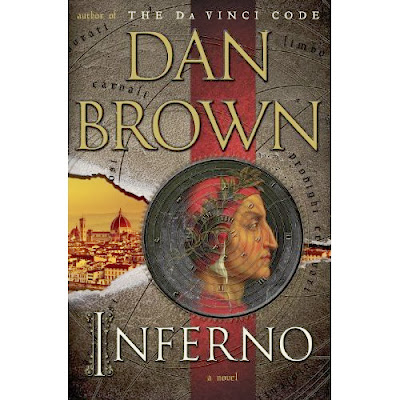 52. – 741.) Inferno by Dan Brown – An unknown man calling himself the Shade climbs high in a Florentine building. Speaking in poetic phrases he seeks to protect a masterpiece:


It grows even now … waiting … simmering beneath the bloodred waters of the lagoon that reflect no stars.


As pursuers close upon him the Shade leaps to his death praying he will not be remembered as “a monstrous sinner, but as the glorious savior”.


His masterpiece is to restrain a burgeoning world population about to exceed the earth’s capacity to sustain its people.


Harvard Professor Robert Langdon awakes in a foreign hospital bed with confused images of a silver haired woman echoing in his mind. As he struggles back to reality a young beautiful woman, Dr. Sienna Brooks, explains to him that his head has been grazed by a bullet. He is shaken when he learns it is two days later than his last memory. His mind is further sent spinning when, looking out the window, he realizes he is in Florence, Italy. How did he get there from America? What happened in the lost days?


Before he can assemble his thoughts an attack is made upon the hospital room. A doctor is slain. Langdon barely escapes with Brooks. They go to her apartment where Langdon tries to grasp what has taken place.


At the same time members of the Consortium, a business devoted to facilitating the needs of the very wealthy are viewing a disturbing video from the Shade about Dante’s hell while showing a shimmering bag suspended in water.


Back in Florence a tube sewn into Langdon’s suit coat contains a form of projector that displays Botticelli’s famed painting, Map of Hell, portraying Dante’s Nine Circles of Hell. Upon the image have been put letters but they do not form a known word. Langdon starts drawing on his knowledge of symbols and cryptography to decipher the letters.


Langdon learns Brooks is a genius, an actress as a child who has become a doctor. When he finds her flowing blond hair is a wig and she is bald he confronts another mystery


Tracked down to Brooks apartment by black clad security forces Brooks and Langdon race away to determine the meaning of the letters amidst Florence’s greatest architectural achievements.


At the heart of the mystery is Dante’s Divine Comedy. Over 700 years after it was written the powerful images of his poetry and the images they inspired continue to make The Divine Comedy a powerful work of art.


The book is a breathtaking chase while Langdon determines the meaning of symbols in word, art and sculpture as a looming catastrophe faces the world.


The end was far more complex and subtle than I had expected. It was a genuine surprise to me. I was glad I read the book. My next post will have some thoughts on the quartet of Brown books I have read – Angels & Demons, The Da Vinci Code, The Lost Sympbol and Inferno. (Nov. 16/13)
Posted by Bill Selnes at 11:12 PM