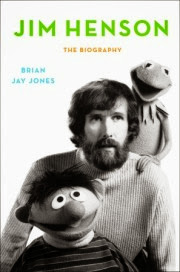 56. – 745.) Jim Henson by Brian Jay Jones – The biography of the inventor of the Muppets is an interesting book that provided me with information on a man I had only known through the Muppets. I found so much in the book my review will take up this post and my next post. A third will deal with my connections and thoughts concerning the Muppets.


Jim was born in Leland, Mississippi in 1936 where his father worked for the Federal Department of Agriculture as an agronomist.


In his mid-teens the family was living in Maryland, just outside of Washington, D.C. Jim desperately wanted to work in television. His goal was to work behind the scenes. He saw himself as a painter and designer.


His first opportunity to work in television came when he successfully auditioned for a children’s television show that involved puppets. While that show ended abruptly he had already created an impression and was given another chance on local television. Jim, using puppets he created, was a success.


By the time he was 19, Jim and Jane Nebel, later to be his wife, had a regular slot as Sam and Friends on a Washington television station show.


Already called the Muppets the characters were intentionally not realistic:


“Those abstract characters I still feel are slightly more pure,” Jim later explained. “If you take a character and you call him a frog … you immediately give the audience a handle. You’re assisting the audience to understand; you’re giving them a bridge or an access. And if you don’t give them that, if you keep it more abstract, it’s almost more pure. It’s a cooler thing. It’s a dfference of sort of warmth and cool.”
An early example of Jim’s genius was recognizing that puppets need not be on a miniature stage for T.V. The camera set the dimensions of the picture for viewers not the stage. To make use of the freedom Jim arranged for monitors to be available so the puppeteers could see themselves performing:


Unlike other television actors, who can’t see their own performance as it happens, “you can actually see what you are doing as you do it,” Jim explained, “and have the opportunity to modify your performance for better effect.” It also allowed the puppeteer to share the viewing experience with the audience at home – a dynamic Jane found particularly thrilling. “You’d perform but you’d also be the audience,” said Jane. “I think that’s a big difference, becaue the people at home watching are seeing a very intimate, internal thing that’s happening with that performer.”


From local television and commercials the Muppets moved onto national television on the Jimmy Dean Show. While Jim was looking to develop a television show for the Muppets from the early 1960’s on the Muppets big break came with the establishment of the Children’s Television Workshop and the creation of Sesame Street.


Beyond being wildly creative Jim had a solid business acumen. From his earliest days he insisted on owning his characters. With the CTW he agreed to share profits from merchandising but he owned the characters he was creating for the show.


While Jim came up with the concept of characters his instuctions to Don Sahlin who built the Muppets were often very brief. As an example he provided a drawing of two characters:


The first had surprised eyes set in a tall, banana-shaped head, topped by a shock of dark hair, while the other – looking rather like Moldy Hay from Sam and Friends – had a head like a football, a large nose, and even larger ears, with shaggy dark hair covering his eyes.


From that sketch Bert and Ernie were born.


Once on national television the Muppets and their crazy antics became famous throughout North America.


My next post deals with Jim and the Muppets as they conqueror the world.
Posted by Bill Selnes at 9:27 PM