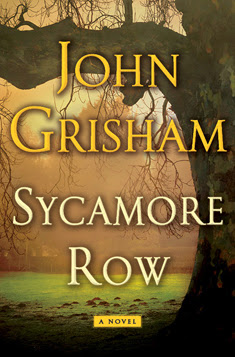 Sycamore Row by John Grisham – You will not read a better current legal thriller than Sycamore Row. Grisham returns to the town of Clanton in Ford County, Mississippi and Jake Brigance, the lawyer with whom he started his writing career in A Time to Kill. This book is set in the late 1980’s about 3 years after the dramatic murder trial in A Time to Kill.


On a fall Sunday afternoon reclusive businessman, Seth Hubbard, hangs himself from a Sycamore tree after leaving meticulous instructions for his burial.


The next day Brigance, while opening the mail, finds a letter posted the previous Saturday. Inside are a letter and a will. The letter to Brigance from Hubbard advises that by the time Brigance reads the letter he will have taken his own life as he is dying from lung cancer. Hubbard continues that the will is a holograph will that he has written that Saturday. (A holograph will is a will made totally in the handwriting of the testator and does not need witnesses.) He assures Brigance that it meets the requirements for such a will and he directs Brigance to defend his will at all costs as it “is likely to start some trouble”. Hubbard, who has never met Brigance and who despises Clanton lawyers, admires Brigance for his defence in the Hailey murder.


The will is a model of simplicity and clarity. Hubbard gives 5% to his brother, Ancil Hubbard, and 5% to the Irish Road Christian Church and 90% to his housekeeper, Lettie Lang, as “thanks for her dedicated service and friendship to me during these past few years”. In harsh language he excludes his son and daughter and directs they only be advised of the will after the funeral because:


I want my family to be forced to go through all the rituals of mourning before they realize they get nothing. Watch them fake it – they’re very good at it. They have no love for me.


Bitter is too tender a word to describe the relationships between the Hubbards.


When Brigance learns that Hubbard is white and Lang is black a shiver runs through him as he knows a bitter will fight is ahead of him.


Prior to the funeral Herschel Hubbard and his sister, Ramona Dafoe, and his brother-in-law, Ian Dafoe, gather at their father’s home. While they can barely stand each other they unite to summarily dismiss Lang grouching about her being paid $5.00 an hour to be housekeeper.


A prominent law firm from Tupelo advises them that Seth Hubbard has made them his primary beneficiaries in a will prepared several months earlier. With both children barely making a go of it financially they eagerly anticipate what they will do with the money.


Stunned is a mild description of the reaction of Lang and the Hubbard children when they learn the next day of the terms of the holograph will.


When Brigance learns that Hubbard’s estate is worth $24 million with about $12 million left after estate taxes the last ingredient for a vicious will contest is in place.


It is a shocking amount for Ford County is poor. Making a living is hard. Few people do better than get by.


With millions at stake, lawyers flock to Clanton. Within days a dozen lawyers are involved, eager to contest the will for Hubbard’s children and grandchildren.


Early in the case Brigance struggles with the decision on whether to proceed to a judge alone trial or a jury trial. It is a choice with which I am well familiar. It can be pivotal to the success of a case yet it is a call that involves as much feel for the case as analysis. It is the type of decision that sorts out good lawyers from average lawyers.


The court action proceeds as I would expect for a major will challenge. Did Hubbard have testamentary capacity, the ability to make a will? Did Lang unduly influence him?


The twists and turns are fascinating and that is before the trial even starts.


Having been involved in several disputed wills cases I can relate to the emotions such actions cause as lifetimes of family grievances and good times influence decisions.


Grisham shows that a civil court case can be as exciting, even more exciting, than a murder trial.


Can Jake Brigance win a second trial for a black Mississippian? Race relations are gradually improving though blacks know their place in Clanton society.


Grisham provides such succinct and useful instructions for being a witness in a deposition that I expect to steal the advice when I next prepare witnesses:


Be polite. Be concise. Don’t volunteer. If you don’t know,
then you don’t know.
As with each of his books set in the rural South, Grisham makes me believe the characters could be found in a town in northern Mississippi. Their language, backgrounds and actions are all convincing.


Last year I found The Racketeer a clever book but hoped Grisham would go back to the Deep South in his next book. He has returned brilliantly with Sycamore Row. It is as good as The Confession.


Set aside a day if you pick up the book. You will need the time.
Posted by Bill Selnes at 11:38 AM