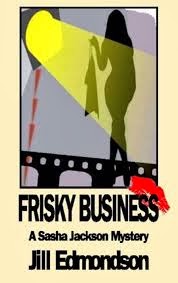 
The $1,000 a day earned by the women hardly seems worth the damage to their psyches. While male actors are discussed they play little role in the book.


Kitty has been well regarded because of the large number of her movies which are downloaded on the net. At the same time she had been stirring matters up at the studio by wanting better pay and working conditions.


Sasha keeps prodding at witnesses gradually developing what was going on in Kitty’s life before she was killed.


Sasha receives some crude threats but is undeterred. If anything she becomes more focused in the investigation.


Reading about Sasha’s life is a great reason to read the book. Jill continues to develop her sleuth.


Among the funniest scenes in the book are the driving lessons Sasha has undertaken. In her 30’s she has yet to master driving.


In her personal life she is suffering mixed emotions about her relationship with downtown lawyer, Derek. Sasha is tentative about committing fully to the relationship. It is Derek who wants to make them a couple. She is not sure she is ready to live with Derek.


Unfortunately, while Jill’s loathing of the adult film industry is well justified, the book ventured into being preachy about the industry which obscured the plot at times.


I found the male characters becoming one dimensional. Either they were very good or very bad. If they were very bad they were likely to be unattractive, even ugly. I understand Jill could not bear to have positive characters as adult movie executives. I wish they could have been more rounded.


Unlike earlier books it was not a mystery with regard to the solution. It was clear who committed the crime. Finding evidence to prove guilt was the story. It is hard to maintain suspense when the resolution is clear early in the book.


I continue to enjoy the series. I did not find Frisky Business as good a book as The Lies Have It. I am confident the next book in the series will be better. I thank Jill for forwarding an electronic copy to me. The book is currently only available in an electronic format.
Posted by Bill Selnes at 11:42 AM