The Bat by Jo Nesbø and translated by Don Bartlett 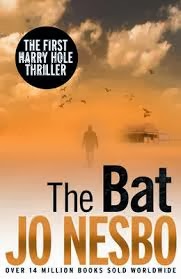 The Bat by Jo Nesbø and translated by Don Bartlett (1997) – I was stunned by The Bat. It is a powerful book that happens to be crime fiction. I can see why the first book in the Harry Hole series was such a success when it was published in Norway almost 17 years ago.


I do not find sending the sleuth to a location thousands of kilometers from home often works well. The Bat is an exception. I cannot see the book working if it were set anywhere but Australia.


Among the striking aspects of the books is the humour. When Harry arrives in Sydney he dreads being called Hole by the ordinary English pronunciation. When the Australians latch on to Holy he is content.


Harry is sent to Australia to liaise with the Sydney police on their investigation into the death of Inger Holter, a young Norwegian woman, who has been strangled and sexually assaulted.


He is teamed with Andrew Kennsington a beaming and bright Aboriginal who establishes a friendship with Harry in a day. Their banter is engaging. It is a tribute to Bartlett’s skill as a translator that he preserves the funny exchanges. I think one of the hardest aspects of translation is to save humour. Every language has quirks in humour that defy easy translation.


Andrew’s recounting of Aboriginal stories is both fascinating and integral to the plot.


Hole is attracted to Birgetta, a beautiful red headed Swede, and she accepts his somewhat awkward invitation to go out.


As she wonders why he does not drink Harry reveals he is an alcoholic:


“All my life I’ve been surrounded by people who love me. I’ve been given everything I asked for. In short, I have no explanation for why I’ve turned out as I have.” A puff of wind brushed Harry’s hair, so gently that he had to close his eyes. “Why I have become an alcoholic.”


He stopped drinking, after driving a car under the influence which was involved in an accident where a colleague was killed and a teenager paralyzed. The psychological effects of the accident, especially how it was dealt with by the police department, have permanently damaged Harry.


It is a struggle for Harry to have personal relationships. Andrew and Birgetta breach his walls of loneliness.


Harry describes the consequences of being a detective:


“You’re a tiny bit damaged every time you unravel another murder case. Unfortunately, as a rule there are more human wrecks and sadder stories, and fewer ingenious motives, than you would imagine from reading Agatha Christie. At first I saw myself as a kind of knight dispensing justice, but at times I feel more like a refuse collector.


Harry cannot just be an observer, a police tourist. He joins the Australian officers in the hunt for the killer.


In the investigation, as Harry looks at the evidence, he wonders if there is a serial killer. As the police look at that possibility anxiety rises within the department that they may have a killer moving around the continent.


Harry finds it difficult to put the information gathered together:


“It’s a bad job on God’s part to give a man with so little intelligence such a good eye for detail, ….”


The bat, an aboriginal symbol of death, provides the perfect title for the book.


Harry Hole reminds me of another Harry, Michael Connelly’s Harry Bosch. Each man has great determination. Their intense focus lets them put together clues other police officers have been unable to assemble. Both are flawed men in their personalities. Each battles sorrow.


It was a book that left me wanting, almost desperately, to know what happens next to Harry Hole. The Bat left me haunted by Harry. Lauren, my older son’s girlfriend, had given me The Bat and Cockroaches as Christmas gifts. While I usually prefer not to read books back to back from a series as too often I find it makes me tired of the characters I started reading Cockroaches, the second book in the series, as soon as I finished The Bat. (Jan. 5/14)
Posted by Bill Selnes at 10:59 PM