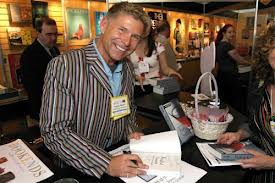 Interested in knowing what is happening with Anthony Bidulka and his sleuth, Russell Quant, as it has been quite awhile since the last mystery I exchanged emails with Anthony this week.


I have been wondering about Russell Quant. It has been over two years since Dos Equis was published. Last year was the debut of Adam Saint in When the Saints Coming In and this fall The Women of Skawa Island will be released. Then I read you are working on a standalone book. There has been nary a mention of Russell.


Last year Metro News in Saskatoon published an article on an interview with you which contained the following paragraph:


While his focus is on his new character, Anthony Bidulka hasn’t ruled out the possibility of returning to the Russell Quant series someday. “I never say never, but for me the last book ended in a place where if that’s it for Russell, if we don’t meet him again, he’s in a positive place for him to be. But if I go back to it I think there’s a whole new direction to go with it.”


On your blog you did a poll that asked readers how long a series should last with the leading answer being as long as the series is good.


I admit I have been hoping to hear there would be more Russell Quant mysteries. There are a lot of places in the world he has not visited. Following you and Herb on Facebook confirms you are continuing to conduct abundant research on world destinations Russell could also travel to in further adventures.


I have always thought Russell could be involved in an adventure with his mother in the area of the family farm. With a significant number of Saskatchewan people traveling the world on agri-business I know you could come up with reasons for Russell to travel that involve the farm.


Secretly, I have dreamed Russell might have an adventure in which he comes to Melfort to see his sister who might have transformed her life.


Essentially I miss Russell. He had become a part of my annual to bi-annual reading. He remains young at heart and a witty companion.


Dos Equis may have ended in a “positive place for him” but to me he had been re-charged and was ready for new challenges.


If the end of the series has come I would be interested in whatever more detail you would be prepared to share to explain why you have decided not to write more Russell Quant mysteries.


Russell may be in a “positive place” but his author does not have to take him to a negative place to write more mysteries.


If Russell will be back I would be excited to know when we can expect a new book.


It sounds like you and Herb and the dogs are having a good summer.

I hope all is well with you and Sharon and that you've been enjoying the glorious Saskatchewan summer.

Thank you for your note regarding the future of Russell Quant. Indeed, I too find myself missing Russell and Sereena and Anthony and Barbra and Brutus and the rest of the gang. Hardly a week goes by when someone doesn't ask the same questions you have; which is wonderful. I suppose all that is to be expected after 8 books and a decade of Russell Quant adventures.

I still stand by my never-say-never response which you quoted. For the moment, Russell continues to be on hiatus. I certainly appreciate your interest and the interest of other Quant readers in another book, but for the moment it is simply a matter of not having enough time to pursue all my opportunities and interests. When I began my career as a writer, having left a successful but time-consuming and sometimes gruelling career as a CA, although part of the transition was the dream of attempting to write a book, it was also a personal promise to find better balance in life. If I spent more of my time writing, could I crank out another Russell Quant book? Absolutely. Do I have plenty of ideas for Quant stories? Certainly. But I never want to 'crank' out any book. Not good for readers, not good for me.

The time I spend writing continues to be - even fifteen years after I took my first steps down this path - a complete labour of love and joyfulness. I still can barely believe I get to do this every day.

So, Bill, this is a wordy response to your question, but for now I am finding my passion in investigating new writing projects, like the Adam Saint books and the standalone I am currently working on. When time and passion allows, I may revisit our good friend, Russell, and if that happens, it will be a joyous thing and it would be the best, dang Russell Quant book yet! In the meantime, I hope readers can enjoy the results of my current efforts. Similar to my career path, from farmer to shoe salesman to teacher to accountant to writer, change is a good thing.

Thanks again for the interest. Good to hear from you and happy reading.