An Officer and a Spy by Robert Harris 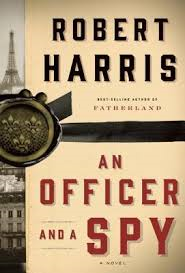 An Officer and a Spy by Robert Harris – A retelling of the Dreyfus Affair, a huge scandal, which occurred at the end of the 19th Century in France. It was a powerful example, of which many have subsequently occurred, of an unsuccessful coverup being a more important story than the original actions under investigation.


What makes the book new is the story being told through Georges Picquart, a stalwart French officer whose family left Alsace after France lost the Franco-Prussian War in 1870. In the mid-1990’s he is an ambitious 40 year old major, a career officer, looking to become a general.


While devoted to the army he is not a sycophant. Ordered to observe and report on the Drefyus trial he questions the strength of the case. Special measures are undertaken by the army through provision of a secret dossier to the court martial court to ensure conviction. Picquart delivers the file to the judges. How the frame-up unravels provides the plot.


As the historical story is well known I will not venture into details. What I want to discuss is the conduct of the legal proceedings.


The military of nations around the world have zealously maintained separate judicial systems to try soldiers, sailors and air force personnel charged with offences. As with most organizations they believe they can best understand the evidence and the procedures involved in the cases. Normally military cases are swifter to reach trials than civil proceedings. While militaries are never going to cede jurisdiction for military justice to civil courts the Dreyfus Affair shows the weaknesses when a justice system is not independent.


In France of the late 19th Century courts martial were public events. Having trials open to the public is one of the fundamental guarantees that justice will be done as it is seen to be done.


I appreciate some evidence in proceedings against alleged spies must remain confidential form the public but, if it cannot be tested by review and questioning from counsel for the defence, it is prone to error.


With Dreyfus, the secret file neither Dreyfus nor his lawyer saw at his trial, contained the pivotal evidence. At the same time it proved totally unreliable when eventually it was carefully scrutinized.


Once the army concluded its “honour” would be besmirched if Dreyfus was acquitted all sense of justice was lost. It is hard to admit mistakes. It is worse in affairs of national security to seek a scapegoat.


Had that file been subject to the same rigorous scrutiny that other evidence received it would have been clear that there was a spy in the French army who was not Dreyfus. Even a basic investigation would have revealed it was “Count” (the title is claimed not real) Ferdinand Walsin Esterhazy.


Once a wrongful conviction had been obtained the army sought to cover up its misdeeds.


Reviews and re-trials were within the French military systems. The command of the French army committed itself to a lie to try to maintain its “honour” for a wrongful conviction and cover-up. No military judicial system was going to find Dreyfus not guilty.


When the case was first reviewed in civil courts they were caught by the principle that appellate courts must accept findings of facts by lower courts if there is some evidence to support them.


With military judges finding facts against Dreyfus appeals were doomed.


Yet Picquart, who never liked Dreyfus and had little regard for Jews, and other Dreyfusards, most famously Emile Zola, and dedicated lawyers created a record that ultimately freed Dreyfus when set out in French parliamentary proceedings.


Harris casts Picquart in the role of reluctant sleuth who, while in command of the French “Statistical Section” (Secret Service), to his surprise and dismay determines there was a miscarriage of justice. Picquart is a genuine man of honour who is not prepared to acquiesce to injustice. Equally important he places the security of the nation, finding the real spy, above the “honour” of the army.


In an earlier non-fiction book, Selling Hitler, Harris vividly told the story of how fake Hitler diaries were accepted as genuine because Stern magazine and historians wanted them to be real.


In An Officer and a Gentleman he sets out how the French Army and its judicial system accepted forged and other undependable evidence as it wanted Dreyfus, a Jew, to be the spy.


Harris has written an excellent book. He has a talent for turning historic events into good fiction. An Officer and a Spy reminds me of how he created a good book, Enigma, on the British breaking of German codes during WW II.


Based on my previous reading of a non-fiction account of the Dreyfus Affair I believe and appreciate that Harris was factual in his exploration of the events set out in An Officer and a Spy. He accepts the facts are strong enough on their own rather than trying to sensationalize them further in his retelling. An Officer and a Spy is a very good book. (Sept. 30/14)
Posted by Bill Selnes at 7:44 PM