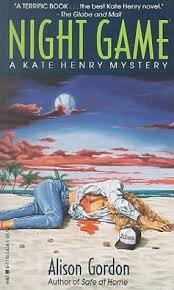 41.– 788.) Night Game by Alison Gordon (1992) – Kate Henry, sports writer for the Toronto Planet (possibley a variation on the real life Toronto Star) is in Florida to cover spring training for the Toronto Titans baseball team.


Henry, like the author, is the only female sports reporter covering the major league team. (Gordon was the first woman to be the sports writer for a major professional sports team in Toronto when she was assigned to the Toronto Blue Jays.)


It is the first day of training camp and one of her first encounters is fellow journalist Juicy Lucy Cartwright. Henry sums up Cartright on the opening page:


She wore an oversized white satin shirt tied around her tiny waist, unbuttoned to show a red tube-top stretched to the ripping point by her enormous breasts. She stopped, pulled a comb out of her large canvas carry-all, and ran it through her shoulder-length, tousled, streaked blonde curls.


Cartwright is writing stories for a local Florida “fanzine”.


Cartwright has been busier off the field with the team than as a journalist. She has slept her way through a succession of rookies and occasionally more veteran players.


Training camp sees a new manager, Warner Olliphant, intent on on emphasizing the fundamentals of the game to a team that was considered to have under-achieved the previous season.


One of his first edicts is no moustaches or beards and short hair. Instructed by the paper to find someone to photograph losing his facial hair Henry approaches Flakey Patterson, who, embodying the stereotype of the quirky left handed pitcher, advises her he is shaving his beard and more:


“Completely. By tomorrow morning, there will not be a region on my body, public or private, that is not as smooth as a newborn child’s.”


Henry opts to be present for the public shearing.


Accustomed to crude ballplayers Henry is adept at put-downs. When she meets Glen Milhouse, the new catcher, they exchange remarks:


“It’s still early,” I said and walked away.


Henry has a rapport with many of the veteran players based on mutual respect.


To celebrate her birthday Henry heads out for a night on the town with fellow Planet reporter, Jeff Glebe. After a night filled with a little dancing, some food and a lot of drinking they are wending their way along the beach sometime after 2:30 in the morning when they see “someone sprawled on one of the chairs”.


Henry, thinking no one should sleep outside, goes to rouse the someone. It is Cartwright. She  has been shot on the beach and is dead.


The lead Florida investigator is Detective Sergeant Troy Barwell. His manner is offensive which, when coupled with a patronizing attitude to women, earns Henry’s enmity.


A young Latin player, Domingo “Dommy” Alvila is arrested for the murder.


Other players, questioning his guilt, band together and encourage Henry to find the killer as she has in a couple of previous cases. Henry, with a pretense of regret, agrees to investigate.


Interviews are relatively easy to arrange. Most of the players live in a beach-front complex. The single players have the smaller apartments while the married players, especially those with children, take the bigger units.


As she probes Henry learns that Cartwright was far more intelligent and skilled than Henry had realized. A woman who has spent her life battling prejudice against women, Henry is forced to face her own chauvinism and assumptions with regard to Cartwright.


The book reads smoothly. Gordon understands professional baseball and its inhabitants. It is a good mystery.