Other Revews of A Door in the River 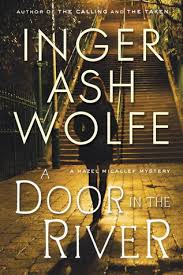 My last post, a review of A Door in the River, by Michael Redhill writing as Inger Ash Wolfe expressed my disappointment with the book. It was more disconcerting as I had enjoyed the first two books in the series featuring Hazel Micallef. Wondering if I had been unfair or misguided in my review I looked up a number of reviews of the book online. In this post I put up excerpts from the reviews I read. Included are reviews from 3 of the 4 largest newspapers in Toronto (the Star, the National Post and the Globe and Mail).


I found it difficult to reconcile the two narratives, even more difficult at times even to visualize the architecture of the setting. The frequent shifts of point of view were also a bit de-stabilizing and added to my fancy that there were several hands at work here. Clearly, I was wrong in my surmise, but still I hope that the creator of the redoubtable Hazel Micallef will be allowed ascendancy over whatever aspect of the author's psyche is responsible for the loopier plot excursions that mark the series. She's a treasure, far to good to waste.


In The Toronto Star the review by Canadian author Jack Batten said:


Then the book identifies the driving force behind the crimes, and our reaction is, first, a feeling that this is preposterous, and, second, a sense of disappointment. But within pages, the narrative is restored, the tipped-over plot righted, all becomes well again. Redhill hasn’t changed the facts of the case. He’s just shown how deft he is at manipulating a good story.


Except that where others might close the aforementioned door, Hazel busts it wide open with a few choice questions and observations. That widens the opening even more to a nasty, shadowy world of gambling runs, illegal prostitution, extortion and serial kidnapping, as well as a murderer with a very bloody sort of revenge on the mind. Stones aren’t just left unturned but leave gaping, awful voids exposed to the surface, where the metaphorical cockroaches have nothing else to do but scurry for distant cover. Port Dundas, and Hazel, will be forever changed, psyches scarred in the process; but Wolfe wisely leaves the door open, too, for DI Micallef to win over readers’ hearts in another go-round in exposing the worst of her beloved community’s demons.


Darkens steadily from its deceptively quiet opening to its wild and woolly climax. But it’s only the shocking epilogue that reveals Wolfe’s true subject as the murder of innocence.


Luanne at her blog abookwormsworld@blogspot.ca said:


Loved it! Loved it! Loved it! The plot is an absolute nail biter. The tension was so high, I had a very hard time the last eighty pages not turning to the end to see what happened. I managed not to - and I'm glad I didn't. There are some twists I didn't see coming and I was lulled into a false sense of security by the last few pages. (Happily) Caught unawares again.


At mbtb-books@blogspot.ca the review said:
It's a book I'd like to recommend to people who enjoy good
characters, but the queasy psychopathic element is limiting.
Nevertheless, I chose The Calling as a year's best pick in 2009,
and, I continue to be a fan.
Margaret Cannon, the best known mystery reviewer in Canada for a major paper said in The Globe and Mail:


There are some big jumps in this plot as it morphs from a country killing into international slavery, and readers have to take a few coincidences with grains of salt. Still, the story holds up, the characters have depth and resonance, and the end is chilling.


It appears I am in a minority in my disappointment though Margaret’s review is but modest praise.


Reading the above views has not changed my opinion of A Door in the River. It is not the quality of mystery I expected from Redhill.
Posted by Bill Selnes at 10:46 PM