Death of a Lake by Arthur Upfield 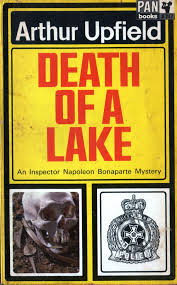 Death of a Lake by Arthur Upfield (1954) – Lake Otway is dying. Three years after it had filled with flood waters a relentless drought is sucking it dry. On the edge of the lake is an out-station for Porchester Station.


Ray Gillen, born in Tasmania, has drifted across the mainland at various jobs and spent some time in the Australian Army serving in Korea. He arrives at the Lake on a motorbike and is immediately hired to work with the stock. One hot November night he goes for a swim and never returns. He is presumed drowned though no body can be found.


While many a man has drowned while swimming late at night it is a rare man who drowns with £12,000 pounds in his suitcase. Gillen had shared a winning lottery ticket of £25,000. After cashing in his share he had decided to tour Australia.
At the out-station are 7 men (5 white and 2 black) and two women, Mrs. Fowler and Joan, her daughter. Both of the women are very attractive. They are quite willing to accept gifts and attention from the men but wary of commitment.


Bony goes to the out-station in an undercover role as a horse breaker. He will live with the men and work at breaking a small herd of horses.


Bony is sure the 5 white men and 2 white women have knowledge about Gillen. Since his disappearance no money has been reported and no one has left the out-station.


With his usual patience Bony works his way into the community. When he shows he knows his way around the horses his disguise is accepted.


It is scorching hot. Each day the temperature is over 100 F. The lake is disappearing and the strain on the residents of the out-station is rising.


No one is talking but everyone is anxious to search for Gillen’s body when the lake has dried up.


When the water level goes below 2 feet in depth the birds and animals around and on the lake are anxious. They can sense its death.


There are powerful disturbing images in the descriptions of what happens to the rabbits, hundreds of thousands if not millions of them near the lake, and the kangaroos and other animals when their water supply is at an end. Nature is not benign.


Bony discreetly prods those living at the out-station and friction flares.


While Canadians know cold Australians know hot. When the temperature goes about 110F life is unbearable for everyone and the water level drops even faster.


There is an inexorability to the dying of the lake that carries into the mystery. How and why Gillen died will be resolved when the lake is equally dead. It creates a natural tension to the mystery that is striking.


The book is a fine example of Bony’s understanding of human psychology with less bushcraft than most other Bony stories.