The Mao Case by Qiu Xiaolong 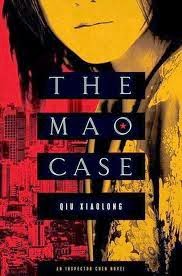 The Mao Case by Qiu Xiaolong – Chief Inspector Chen Cao is having a fairly routine, if somewhat abstract, day at a political studies meeting of the Shanghai Police Bureau’s Party Committee on the topic of building “spiritual civilization” in China. Materialistic socialism has replaced the egalitarian ideals of the Communist revolution. A restaurant has found success calling itself the Mao Restaurant with photos and quotations and dishes asserted to be enjoyed by Mao.


In the midst of the meeting Chen is startled when he is told his girlfriend, the highly placed and connected Ling, has married. While their relationship had been notably “off –and-on” he has not seen it as over and is “astonished”.


While brooding over Ling’s marriage he receives a call from Huang Keming in Beijing, the new Minister of Public Security, about a sensitive political investigation. One of Mao’s “dancing” partners was an actress Shang Yunguan, whose career accelerated as a result of that relationship. She committed suicide early in the Cultural Revolution. The government is concerned that Mao provided her with something that could cause problems for the Party were it to become public. Shang’s granddaughter, Jiao, has recent unexplained financial benefits.


They want  him to resolve the question quietly to avoid Internal Security undertaking “tougher” measures.


“This is an assignment you can’t say no to, Comrade Chief Inspector Chen. Any slander against Mao, the founder of the Chinese Communist Party, will affect the legitimacy of our Party. This is a special task and Comrade Zhao recommended you to me.”


Chen is relieved of all other duties.


Jiao spends a significant amount of time at parties hosted by Xie. These parties are unique in that they seek to re-create the atmosphere of Shanghai in the 1930’s prior to the Communist takeover. They are held in Xie’s mansion, a fading but still elegant, private residence.


Chen, aware that there would be major personal consequences if he is unsuccessful, would like to investigate alone but realizes he needs help. Old Hunter, the retired police officer, and other friends and colleagues assist him.


There is a brief contact with Ling leading to Chen’s poignant recollection of a poem:


Sad it’s no longer sad,/ the heart hardened anew,/ not expecting pardon,/ but grateful, and glad / to have been with you,/ the sunlight lost on the garden.


As customary with the series the book takes the reader deep into Chinese history and society with compelling characters. Part of the mid-section of the book was not flowing for me but the conclusion is amazing. With each book I gain some understanding of modern China through a great mystery.