Last of the Independents by Sam Wiebe 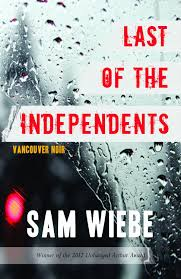 
“The younger Thomas Kroon leaned forward on the clients’ bench and said, ‘There’s no real polite way to say this, Mr. Drayton. Someone’s fucking our corpses and we’d like it to stop.’ “


Who wouldn’t and what reader could resist being grabbed by those opening lines. Michael Drayton accepts the assignment from the Kroons to determine who has been violating bodies at their funeral home.


At the same time Drayton agrees to search for Django James Szabo, 12 years old, who has been missing for several months, after the car of his father, Cliff, was stolen with Django inside. Cliff makes a modest living purchasing, fixing and re-selling discarded or used appliances, electronics and furnishings.


Drayton, 29 years old and living with his grandmother and his dog, operates Hastings Street Investigations out of an office in the roughest section of downtown Vancouver. On his cards he has proudly inscribed:


“Last of the Independents”


A big strong man and former Vancouver City Police officer, Drayton reminds me of Travis McGee. He has the same physical presence and innate stubbornness against accepting advice or following rules.


His investigative approach comes from his police officer grandfather:


“When you’ve only got a hammer you treat every problem as a nail.” Sometimes your options aren’t limited by your tools so much as by the mindset you bring to them. But that doesn’t mean that mindset is necessarily wrong. Sometimes the problem really does call for a big fucking hammer blow.


Unlike many private investigators whose income is vague Drayton is very conscious of his finances. He is barely solvent. His finances are stretched by his willingness to pursue cases for little to no compensation from clients with meagre resources that he considers righteous.


While Drayton is proudly independent Katherine Hough, a student, works part-time for him.


In a nifty play on the Baker Street Irregulars Drayton is aided by the Hastings Street Irregulars. Ben Loeb is the creator/writer of successful video games and brother of another missing teenager for whom Drayton is searching.Amelia Yates-Yeats (she lets people use both spellings), a beautiful producer of music recordings.


The book is not about the rich and famous. Most characters have the struggles of ordinary people. Some exist on the wrong side of the law.


Cliff is different from the average desperate parent seeking their child. He is prickly and abrasive. He is as abrupt confrontational with those seeking to help him as he is with those he considers obstructive.


While Drayton would never acknowledge it, he is an idealist. He is determined to achieve justice in his cases. In a world of grays he lives a black and white existence. It is a lonely quest.


The funeral home investigation was unusual. I can confidently state I have never read a mystery involving either a crime in a funeral home nor the crime committed there in this book. Some experiences are best not repeated.


The book is well set in Vancouver. It describes life in a part of the city far different from the affluent environs described in Silver Totem of Shame by R.J. Harlick that I read late last year.


Last of the Indpendents is a gritty story. The cover accurately describes the book as Vancouver noir. In my next post I will discuss a unique award for the book.


Drayton is a worthy addition to the ranks of the world’s hard boiled detectives. I look forward to his next adventure.
Posted by Bill Selnes at 8:40 PM