None So Blind by Barbara Fradkin 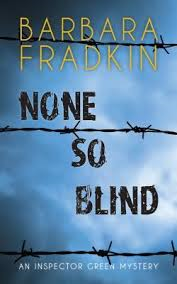 19. - 816.) None So Blind by Barbara Fradkin – I am late to this series featuring Inspector Michael Green of the Ottawa Police. None So Blind is the 10th book in the series.


It is a challenging book to review because to give a summary of the story is to spoil the story so I turn to an approach I use occasionally in reviews. This post will avoid spoilers. My next post will get into a discussion I want to have about the theme of the book that will involve some spoilers.


None So Blind had a slow start.
Green is mired in reports as a new Superintendent is insistent that she receive a “thorough briefing on all personnel, policies and procedures under her command. The three dreaded p’s of his administrative duties”. Green is not a talented bureaucrat.


In the midst of his paperwork he receives yet another letter from James Rosten who is 20 years into a life sentence for murdering Jackie Carmichael.


Rosten had been a rising biology professor when he had a personal relationship with his student, Jackie. After she was found strangled, the investigation led by a young Green, focused on proving Rosten guilty.


Rosten has staunchly maintained his innocence and has plagued Green with detailed letters over the years explaining why he was not guilty and challenging the evidence.


While in prison Rosten has been assaulted by other inmates and is now in a wheelchair.


The latest letter is one of his shortest:


Rosten is referring to the death of Lucas Carmichael, the stepfather of Jackie. Rosten was convinced Lucas was the killer.


Green, as with all the letters, is unconvinced that Rosten is innocent.


The letter does prompt Green to visit Marilyn Carmichael who had fiercely campaigned to have Rosten convicted. Marilyn finds her grief over the death of her husband extending back to the never ending sense of loss from Jackie’s death.


Upset when he finds Rosten has written to Julia, Jackie’s sister, Green travels to the penitentiary to visit Rosten. Green finds a broken man, physically and mentally, who is ready to change. He tells Green:


“You’re right, time to let it all go. I’ve done what I could do, to no avail, for myself or for them. I won’t bother them anymore, if that’s what you came about.”


Unlike many police officers, Green wants Rosten to have a future. Green believes Rosten has served his time and he urges Rosten to seek parole.


The story takes off when Rosten makes the application to be released. Marilyn’s appearance at the parole hearing and her letter to the parole board are startling.


What happens because of the parole application challenges Green and will be the subject of my next post.


None So Blind is a thoughtful book with a fascinating sleuth. Green is the child of Holocaust survivors. His aged father, Sid, is still alive. Green is in the midst of a successful second marriage. He has a 20 year old daughter from his first marriage and two young children from his second marriage. Not enough mysteries have a sleuth wrestling, while solving crime, with the domestic issues of pre-school children and an elderly parent whose health is in decline.


By accident I have read consecutive mysteries that are police procedurals involving Ottawa Police Services. None So Blind happened to be the second book in the pile of 5 mysteries on my table that make up the shortlist for the Arthur Ellis Award for Best Crime Novel in Canada. As set out in my last post listing the winners None So Blind did not win the Award.
Posted by Bill Selnes at 9:27 PM