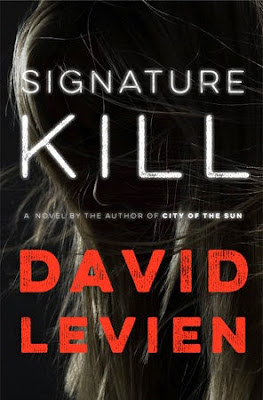 17. - 814.) Signature Kill by David Levien – Frank Behr, former Indianapolis police officer and now a private detective, has no pending cases. He is depressed. He has a 6 month old son, Trevor, from a relationship with Susan that continues fitfully but not with them residing together. He has not yet completed recovery from a badly damaged clavicle caused by a shotgun blast.


Driving through the city he sees a billboard for a missing young woman, Kendra Gibbons. Her family is offering a reward of $100,000. With no other work Behr visits her mother and decides to pursue the case. She gives him abit of information but it looks to be a quixotic quest. There are no real leads.


He has little money but decides to proceed even though he must finance the investigation on his own.


At the same time an unnamed man is stalking a young woman he calls Cinnamon because of her hair. Levien opens his description of the man with:

The words come from a place deep within hi. He feels
that stuff down there, bubbling and stirring, as the thing
inside him that is other looks to push up and outward. He
has to take it for a ride.

It's happening again and before long the red curtain will
come down once more .... Soon.
As Gibbons was working as a prostitute Behr looks for some co-workers. At one of the interviews he is challenged by a pimp. Behr, a powerful man at 6’6” and 240 pounds, wins the fight and establishes his presence.


While he is looking at slender leads Cinnamon is kidnapped. The unnamed man is a serial killer with an obsession for blonde women.


Through the book Levien moves back and forth between Behr and the serial killer.  He delves into the minds of both men.


Behr is a relentless investigator.


The killer is evil, clever and vicious.


It is not a book for readers put off by gory descriptions of torture and death. All are credible given the mind of the killer. They are among the most graphic I have ever read.


Behr is not a desperately dysfunctional sleuth. He relates well to his son and does spend time taking care of him. Behr and Susan have a good relationship though somewhat apart.


The killer has as twisted a mind as any character I have read. He is in the midst of a long term marriage and has a good job. At the same time his mind is preoccupied with capturing, killing and dismembering blonde women.


Through solid work Behr comes to realize there is a serial killer in Indianapolis.


"Yeah. Well, a signature killer, more accurately, engaged
in serial predation. A serial killer is two or more, by any
means. But we use the term 'signature' because even
though the MO can change from crime to crime, due to
the specific and random circumstances of each act, the
key element of the crime that gives the killer the
satisfaction is the same even when the little details
present slightly differently. There can also be an
evolution with these guys - a slowly changing style. But
that signature element stays the same. That's what you
intuited in these cases."
Behr is obsessive in his own way. He is utterly consumed by the search. In a frightening passage he leaves his son alone in his car to pursue a lead. It is an irresponsible, even dangerous act, that is convincing given Behr's nature.


I will not forget the killer. He is a monster. His actions and mind are believable. He functions all too well in the world. No one suspects he is a killer.


Levien has written well about a serial killer and the investigator hunting him. Readers who like to read about serial killers will find it a strong book. While this post is my analysis of the book my next post will be my reaction to the book.
Posted by Bill Selnes at 10:40 PM