No Known Grave by Maureen Jennings 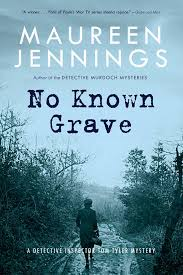 (23. – 820.) No Known Grave by Maureen Jennings – It is 1942 and St. Anne’s Convalescent Hospital has been set up in a former manor house in Shropshire. In this tranquil beautiful setting a group of Anglican sisters provide nursing care to a group of grievously war wounded.

The patients have all suffered horrific injuries. Some are blind, some are crippled, some are disfigured, some have been burned and some have severe mental trauma. Many have multiple injuries. All are in need of long term care. I found it interesting that Jennings included civilian victims of war as well as military personel.

At the hospital the staff work to heal those injuries for which treatment is possible and provide some vocational training.

In powerful images the less injured lead the blind who place a hand upon their guide’s shoulder and they push the wheelchairs of the crippled.

In the midst of their pain and adjustment to life changing injuries the patients retain a sense of humour. The members of the massage class call themselves the Rub-a-Dub Club.

Their routine ends one morning when a blind instructor in massage and his teenage son, Sergeant Jock and Ben McHattie, are found dead in their cottage. Both have been shot in the head. A younger boy, Charlie, saw the killer looking at him but was spared.

Inspector Tom Tyler is summoned to the hospital by the almoner, Sister Rebecca Meade.

Upon learning of the status of the patients, Tyler provides some special instructions to his officers:


“When you’ve done that, you’ll have to get fingerprints from the residents. I warn you, some don’t have fingers and there are several who are blind. Use common sense. The almoner or one of the sisters will help you.”


In his examination of the cottage Tyler finds a dead pigeon on a window ledge with a handwritten message in a small tube attached to the bird’s leg:
THEY HAVE NO KNOWN GRAVE
With no one having a motive to kill the McHattie’s and the cryptic note Tyler struggles to know where to start the investigation.
The setting leads him to focus on the staff and patients. The manor is locked up at night with a high wall surrounding the grounds that would be difficult to scale.


It took some time for me to realize that the plot is a variation on an English country house murder mystery.


Tyler is a diligent officer and steadily acquires information on the staff and patients.


Interviews are difficult with the patients. All of them are severely injured and Tyler does not want to aggravate their problems. At the same time he is determined to reach his own conclusions on the ability of each patient to commit murder.


The pace of the book is steady. I found it a good but not great book. The motive for the killings was a genuine surprise though credible. The circumstances of the resolution stretched credibility and were not as good as the rest of the book.


I am interested in reading more books involving Inspector Tyler. He is a troubled man with issues from his personal past bothering him. His troubles do not play a large role in the book. They appear to give him empathy with the patients.


The best part of No Known Grave involved the characters. They are interesting and well written.


No Known Grave is the 4th of the 5 books I have read from the 2015 shortlist for the Arthur Ellis Award for Best Canadian Crime Novel . I have started on the 5th which is Plague by C.C. Humphreys.


No Known Grave is the 1st book I have read for the 9th Canadian Book Challenge which started on July 1.
Posted by Bill Selnes at 12:27 AM