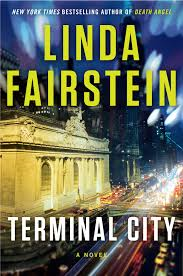 (27. - 824.) Terminal City by Linda Fairstein – The 16th Alexandra Cooper mystery is another well written book by Fairstein. The Manhattan Assistant District Attorney Cooper, better known by the police as “Coop”, is called to a suite at the Waldor Astoria hotel where a young woman has been brutally killed. After being sexually assaulted her throat has been slashed from ear to ear. Carved into her body are some designs in the shape of ladders.


As a member of the Special Victims Unit of the District Attorney’s office Cooper is present to help participate in the investigation to help ensure the evidence is effectively developed for trial.


She joins Detectives Mike Chapman and Mercer Wallace in the investigation.


Not having read a book in the series for some years I do not know the background of the relationship between Chapman and Cooper. It is clear in the book they have been lovers but it is neither an open nor stable relationship.


There are few clues in the suite. It was interesting to read of a new forensic device that can date when blood flowed from a body by its decomposition. It gives the investigators a more accurate and tighter range of death than a pathologist at the scene can give from examining the body.


It is an unusual hotel killing in that the victim was not a guest and they cannot find a video image of her entering the hotel. Eventually they determine she was brought to the hotel by a means that prevented her entry from being seen.


Small leads take the detectives and Cooper into the Grand Central Terminal. It is an amazing building but an absolute nightmare for a police investigation. It is a vast building above and below ground. There are passages unmarked on blueprints. There are active tunnels for trains and closed tunnels. There are exits almost beyond number.


When there is a second murder whose victim also bears the carved designs the investigators realize they have a dangerous killer using the Terminal.


The killer’s motive is unclear. The team struggles to find a reason for the killings especially the first murder.


The second victim spent much of his time underground in the vicinity of the station. Cooper and the detectives explore the tunnels where hundreds are living in communities. It is a dark and dismal life. They are known rather derisively as “moles”.


The connections underground between subways, trains and passages to buildings were so extensive as to be almost impossible to document.


The book revealed to me there is an actual terminal city in central Manhattan. In Bone City by Jeffery Deaver I had learned of the extensive underground to Manhattan but I had not been aware of the majesty and complexity of Grand Central.


Unused tunnels hold unexpected artifacts such as FDR’s armored train sitting in the dark for decades.


The terminal gives the book its focus. While setting is often important it is vital to Terminal City. As the book went on I found myself look forward as much to learning more about Grand Central as I did to the development of the investigation.


It is an excellent police procedural. The detectives and Cooper are clever and determined investigators. If I had read the book expecting a criminal investigation I would have been happy with the book. However, I read the book as one of the three books on the shortlist for the Harper Lee Prize for Legal Fiction.


Cooper functions as another criminal investigator in the book. It is a stretch to find anything she really does as a lawyer in the murder investigation. Her brief attendance in court is on a different case.


Cooper, being a lawyer assisting the police, does not fit with my expectation for a book nominated for a prize in legal fiction. The book is devoted to the investigation. Thus I am disappointed that it was chosen for the shortlist.


Fairstein is an accomplished writer with numerous books in the series featuring Cooper acting as a lawyer. It would be ironic if she were to win the Harper Lee Prize for a book in which Cooper is actually acting as a police officer. (August 8, 2015)
Posted by Bill Selnes at 10:15 PM