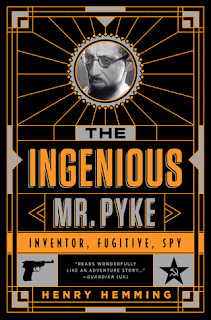 The Ingenious Mr. Pyke by Henry Hemming – It has been a long time since I was astonished while reading a book. It is my preference to know as little as possible about a book before reading it. Following that principle led me to think that the The Ingenious Mr. Pyke was a work of fiction. The cover is unusual. The photo of Pyke looks like an actor made up for the part of an eccentric English genius. The blurb on the front cover from the Guardian says “reads wonderfully like an adventure story”.


The incredible life described in the book continued my belief that it was fiction and barely credible fiction.


Hemming told the story of a man who was more than a genius. While he never finished university he had a versatile and relentless mind that produced an unending stream of ideas. While priding himself on being an innovator rather than an inventor Pyke worked intensely hard to make real his ideas.


How could any living man have had so many adventures and been so brilliant in so many areas?


As a university student of 20 in 1914 Pyke slipped into Germany as WW I started. His goal was to report back to an English newspaper on Germany.


Betrayed, he is captured, threatened with death and then interned. Not content with sitting out the war he considers escape.


Pyke had a compelling approach to problems:


‘Before a problem can be solved it must be detected,’ he later wrote, and ‘it is easier to solve a problem than it is to spot what is the problem (as the whole history of science and technology shows). Almost any fool can solve a problem and quite a number do. To detect the right problem – at least so I have found – requires what [H.G.] Wells calls the daily agony of scrutinising accepted facts.’ This attitude had spirited him into Germany. Now he hoped it might get him out. His motivation this time was altogether different: he was drawn not by the intellectual thrill of confounding expectations though this remained satisfying but the fear he had that his body could not survive a full winter in Ruhleben.


Applying his scientific approach to problems Pyke works out an escape route from the prison and a plan on how to get through Germany in the middle of the war. The escape of himself and a friend is successful.


After the war he conducts a careful scientific study of financial markets and works out a profitable trading system for dealing in copper.


He uses the money to establish Malting School, an experimental school in which young students were allowed free reign to study and investigate what they wished. Pyke viewed children as having a natural scientific curiosity. Careful documentation of what happened was used by English educators for decades after in developing English education.


During the 1930’s Pyke established a program to provide re-cycled items to the Spanish Republicans and embarks on an ambitious program to combat anti-Semitism.


All of the above was done before his most creative efforts with regard to fighting the Nazis in WW II. (My next post will discuss his amazing idea of huge ships made of wood and ice.)


I thought the photos periodically inserted in the book were efforts to add realism to the story.


Hemming’s biography reads like fiction including abundant dialogue. While I am not found of dialogue in non-fiction it works well in The Ingenious Mr. Pyke.


The range of famous people with whom Pyke engaged was enormous. Pyke and Lord Mountbatten had a close relationship. Mountbatten was fascinated by Pyke’s ability to come up with novel solutions to problems.


His greatest legacy involves a Pykean guide to innovation:


His first step simple as it may sound was to be adventurous. Adventurousness could be defined as ‘a readiness to make a fool of oneself’ – something he called ‘the first duty of a citizen’. He lived by Dostoyevsky’s maxim that ‘the cleverest of all in my opinion, is the man who calls himself a fool at least once a month’. Any mistakes that you made were ‘the social and purposive equivalent of Nature’s mutations’, without which there can be no progress. In other words to be adventurous one must also be prepared to look silly or be laughed at and that requires courage. Without this it is almost impossible to come up with a truly radical idea.


It took me almost 200 pages before I realized that Pyke was a real person. I make that acknowledgement in the spirit of Pyke’s commitment to innovation means never being afraid of looking foolish.


And lest you continue to wonder why I thought he was a fictional character at various times of his life he was considered an English spy, a German spy, a Russian spy.


Lastly, as I was skimming the NY Times in May before I read the book I saw it mentioned as a wonderful beach read. Who reads non-fiction on the beach?
Posted by Bill Selnes at 10:37 PM