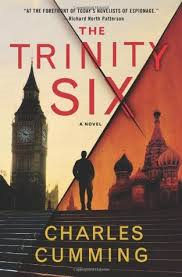 
In Trinity Six Sam Gaddis is an unlikely spy hunter. He is a 43 year old academic teaching Russian history at University College London. He becomes involved in espionage for the simplest of reasons. He needs money. Income tax authorities have levied a claim over 21,000 pounds. His ex-wife is seeking thousands more for the education of their daughter, Min, in Spain. He does not earn enough to meet his obligations.


Yet he does not become a spy. With writing and research his only marketable skills he casts about for a story for a popular non-fiction book. Rumours reach him that there was a 6th man. It would be an easy sale if he can identify a 6th man.


His friend, Charlotte Berg, wants him to join her in writing about the hidden spy. He is tempted. Before he has made his decision Charlotte dies of an apparent heart attack. Readers know she was actually poisoned by the Russian FSB.


As Gaddis probes her research files he cannot find her sources. A dogged researcher he checks calendars and phone records. He finds a couple of leads and pursues the threads.


Gaddis believes he is onto a story when he learns British Intelligence faked the death of a British diplomat shortly after Communism collapsed. Why would they resort to such extreme measures?


While it is clear why British Intelligence would not want the 6th man to be identified there is no clear motive for Russian intelligence to take violent action to prevent discovery.


Gaddis is an amateur in the professional world of espionage feeling his way through spy craft and trying not to get killed.


Trinity Six is far from American thrillers with their double digit body counts though there are violent scenes.


Within the plot there are crosses and double crosses and triple crosses. There are enough crosses to leave everyone paranoid about who can be trusted.
I was reminded of the real life Eddie Chapman in Zig Zag by Ben Macintyre. Chapman is at least a double agent convincing both British and German intelligence that he is spying for them.


While the ending is credible it does not have the bleak conclusion of most John Le Carré espionage novels.