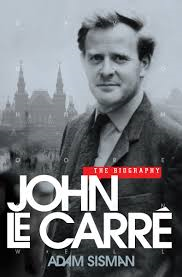 John Le Carré by Adam Sisman – It has been some time since I read a biography of an author. I am not always anxious to learn the personal story of authors as I have found their lives can interfere with as much as enhance the reading of their books. Since my sons gave me the biography of John Le Carré for Christmas the decision was made for me with regard to David Cornwell and it was time to read of the most prominent spy writer of the last 50 years. Over the next few posts I will be discussing the biography, Cornwell’s life especially on how he became an author and his spying experience, my thoughts on several of John Le Carré’s books I read before the biography and The Night Manager which I read after the biography.


Cornwell was born in 1931 to Ronald and Olive Cornwell. It was a dysfunctional family. Each parent had a negative impact on his life.


His father was unfaithful to his wife and a dishonest businessman with permanent amnesia over his transgressions.  He was sent to jail several times. His earliest prison terms were for forgery and false pretences. Ronald’s cheery personality masked his life long practice of deceit in business and his personal life. He was a character if you did not have him for a father. Ronald proudly proclaimed that he had never read a book.


Olive came from a family of strict Non-Conformists, Baptists. She derided Ronald for being from a class below her. Unable to cope with Ronald she left him for another man and abandoned Cornwell and his older brother.  Cornwell was 5 years old.


Ronald dealt with the situation by sending the boys to boarding school. I can imagine the loneliness of the boys. I went to boarding school at 15 and it was as lonely a time as I have experienced as I adjusted to life away from home. Ronald was an appalling father by that action alone.


Fortunately I never had the beatings that were suffered by the Cornwell brothers and all other students. He has bitterly resented the beatings all his life.


After reading about his childhood I could understand how Cornwell might spent a lot of his youth living in his imagination.


Encouraged by a teacher he was writing “lurid short stories” at 13 years of age.


At Sherborne School the Cornwell boys were encouraged to live by the principles of “service, fortitude, self-denial, fair play and courage”. With his father’s unprincipled life in contrast Cornwell was extremely conflicted.


While at Sherborne he won a prize for a long free verse poem.


Cornwell showed an aptitude for languages and was fascinated by German. He eventually reached such proficiency in German that he served as a translator.


In the midst of his chaotic family life Cornwell was a gifted performer. Sisman wrote of him being able to control the circumstances around him as a performer.


He is also a talented artist and considered a career in art. In a book filled with many details about Cornwell’s life Sisman did not explore why Cornwell did not pursue life as an artist.


After attending Oxford he taught for a few years. At 26, while teaching at Eton, he started writing a murder mystery set in a “fictional” public school. Years later it became A Murder of Quality.


Asked to compile a German reader he offered the publisher, Bodley Head, a short story “about a pavement artist who one afternoon produced a masterpiece in pastels on the paving stones in Trafalgar Square, outside the National Gallery; and then the rain came, and washed it away”. The story was rejected.


A few years later while working at MI 5 he started writing a spy novel:


‘I began writing because I was going mad with boredom,’ he would later declare: ‘not the apathetic, listless kind of boredom that doesn’t want to get out of bed in the morning, but the screaming, frenetic sort that races round in circles looking for real work and finding none.’


It became his first book, Call for the Dead.


The origins of Le Carré as a pseudonym have been lost. Cornwell speaks French well and carré means square in French. In reflection Cornwell indicated:


‘I thought that to break up a name and give it a slightly foreign look would have the effect of printing it in people’s memories.’


When his third book The Spy Who Came in from the Cold became a best seller he became a full time author.


In the book Sisman does not ignore Cornwell’s warts. He can be a prickly friend. He is truly thin skinned about reviews critical of his books. His greatest issues have been with regard to his relationships with women.


It would be best not to read the biography if you have not read the books as the plots are fully discussed.


The book is well written.


More frustrating is that beyond a few pages Cornwell’s personal life after 55 is absent from the book. Having reached 60 plus in my life I think a writer’s senior years are as interesting as his younger years.


I expect it will be the signature biography of David Cornwell for at least a generation.
Posted by Bill Selnes at 10:11 PM