The Wail of the Wendigo by Steve Pitt 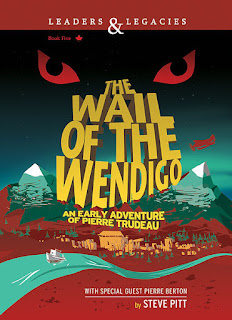 (12. – 854.) The Wail of the Wendigo by Steve Pitt – The 5th book in the Leaders & Legacies series of adventures of future Canadian Prime Ministers features Pierre Elliott Trudeau our 15th Prime Minister and probably the best known Prime Minister of the last 60 years.


It departs from the format of earlier books in the series in that it is not an adventure set in the area where the future Prime Minister is growing up at the time of the story. Rather than a plot set in Montreal The Wail of the Wendigo sees the 11 year old Trudeau travel across Canada to the Yukon with his father, Charles-Emile Trudeau.


It is a book filled with references to real life people and scenes linking the young Trudeau to his time as Prime Minister that most young readers are unlikely to appreciate but are certainly clear to readers of my age.


The book provides the most intriguing reason why Trudeau, as Prime Minister, wore a fresh red rose every day.


To avoid confusion the two Pierres are called Trudeau and Berton.


Charles-Emile has hired Berton’s father, Frank, as a mining consultant to evaluate a claim that he has purchased on the Rat River in the North West Territories. The evaluation to be conducted by panning for gold will take most of the summer.


Trudeau is startled to find Dawson City in the Yukon is but a town of two story wood buildings hanging on thirty years after the end of the Klondike Gold Rush. Trudeau had been expecting a metropolis in the bush.


The Berton’s and the Trudeau’s are flown into the bush in a float plane piloted by Wilfrid “Wop” May, another real life character who was a WW I fighter pilot and was being chased by the Red Baron when the German ace was shot down.


Exploring for gold in the wilderness sounds likely an exciting summer but panning for gold is less romantic than repetitive hard work. The boys are dreading a long dreary summer until their fathers decided to have them go hunting and fishing to provide meat and fish for the camp.


While credible to me, I was a good shot by the time I was 11, it is unlikely today that a pair of 11 year olds would be given a .22 rifle and directed to go hunting on their own.


The city boys are poor hunters and the story is dragging when they meet Henni, a mainly indigenous 11 year old girl, who is living in the bush with her parents to avoid being sent to residential school. She quietly provides Trudeau and Berton with some of her game and fish and then teaches them how to be hunters.


The story takes off when there is an attack upon the camp and the Wendigo, an evil spirit in the spiritual world of Canadian Indians, takes the story into the paranormal. While I do not venture often into the world of the parnormal it is clearly a very popular genre for young and not so young Canadians in 2016. It was equally popular 85 years ago. Trudeau loves reading books featuring monsters and the paranormal in 1931. I certainly know I am not the target audience of the series.


The involvement of the Wendigo brought the book alive. I wish the Wendigo had arrived sooner in the plot.


The Wail of the Wendigo is a solid book.


The book is plausible in taking Trudeau into the bush and having him comfortable far from city life. In real life Trudeau loved the outdoors and was an accomplished canoeist. He passed on his love of the outdoors to his sons. His oldest son, Justin, is now our Prime Minister.


I hope young readers draw inspiration from the book. As set out in my last post the backgrounds of the five future Prime Ministers in the series to date are very different. The series shows young Canadians everyone has the potential to become Prime Minister.
Posted by Bill Selnes at 11:09 PM