The Heart of Hell by Alen Mattich 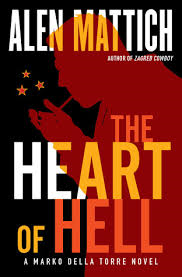 (17. – 859.) The Heart of Hell by Alen Mattich – The third Marko Della Torre novel is a continuation of Killing Pilgrim. In that book Swedish Prime Minister, Olof Palme, was assassinated by a killer from the Yugoslavian Secret Service. The story sees Della Torre involved in an American plan to kill the assassin known as “The Montenegrin”.


With this book carrying on the story it is difficult to review without passing on information that would potentially spoil Killing Pilgrim. There are spoilers in this review with regard to the earlier book.


It has been a few months since the end of Killing Pilgrim and Della Torre is back in Zagreb. The simmering conflict between Croatia and Serbia over Croatia’s declaration of independence has boiled into war. Regular and irregular Serb forces are attacking Croatia by land and blockading the Croatian coast.


While America does not recognize Croatia’s independence members of the Croatian government are working hard to gain American support.


When America wants help in going after the Montenegrin for killing the three Americans who tried to kill him the Croatian government will gladly assist.


As Della Torre was a part of the earlier mission he is pressed, even threatened, to aid the American intelligence officers going after the Montenegrin.


It is clear to Della Torre that the Americans are after corrupt police officer, Julius Strumbic, who was part of the earlier mission. The American team is not interested in seeing Strumbic arrested.


Still, why would America put such resources into pursuing the killers of a trio of Americans who had undertaken a dangerous mission? Della Torre never really knew why Palme would be assasinated by a Yugoslavian agent. There were rumours related to Swedish assembly of centrifuges used in nuclear power and bombs but why a Yugoslavian conducted killing? Centrifuges were being sent to Yugoslavia but what risk could Palme be to Yugoslavia?


Despite threats against his family Della Torre refuses to join the Americans and sets out with his superior for Dubrovnik with some vague plan to warn Strumbic. While his journey and quest are in the best traditions of thriller fiction it was the weakest part of the plot. With Dubrovnik under a tight blockade it is almost impossible to reach the city. It would have been simpler to have sent a message to Strumbic. Though getting a message through would have been difficult it would have been easier than breaching the blockade.


The actual getting through the blockade was the best part of the book. It was ingenious and unexpected.


I missed a deeper involvement in the book of Della Torre’s family. They played roles but were not as important as in Killing Pilgrim. Their minor presence left the book a more conventional thriller.


I did gain appreciation of the ferocity of Balkan wars. Hatred runs deep in Croatia and Serbia.
****
Mattich, Alen - (2015) - Killing Pilgrim and Who Killed Olof Palme?
Posted by Bill Selnes at 5:57 PM