The Hotel on Place Vendome by Tilar J. Mazzeo 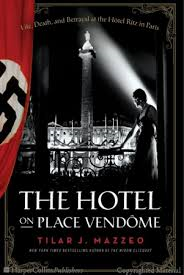 (9. – 851.) The Hotel on Place Vendome by Tilar J. Mazzeo – The Ritz. No hotel in the world is more famous. It has been a destination of the world elite since it opened in the heart of Paris in 1898. Masseo has written a biography of the hotel focusing on its role in World War II.


When the German army rolled into Paris in June of 1940 the Ritz was a favoured destination for its officers. On orders from Berlin the hotel was not formally taken over but remained privately run with Hans Franz Elmiger, its Swiss born deputy manager, in charge of hotel operations.


The German military did take all the rooms in one wing of the hotel paying discounted rates.


The American heiress, Laura Mae Corrigan, was evicted from the Imperial Suite in favour of Reichsmarshall Hermann Goering.


Several long term residents of the hotel continued to stay in the section of the hotel not occupied by the Germans. Most famously, Coco Chanel, maintained a suite.


During the German occupation the Ritz remained the focal point of elite Parisian life. The champagne flowed. The famous mixed cocktails of Frank Meier in the rue Chambon side bar were eagerly consumed. German officers and their French mistresses celebrated good times.


There were Resistance members among the hotel staff but the hotel, as with most of the French population, accommodated if it did not actually collaborate with the German occupiers.


There were spies and plots swirling around the Ritz throughout the war. Mazzeo discusses the meetings of German officers who attempted to assassinate Hitler in the summer of 1944. For a few hours those plotters took over Paris until word spread that Hitler had survived.


After the Allied invasion of Normandy in June of 1944 there was a race to return to Paris. While the Allied armies looked to re-take the capital of France among American war correspondents it was a competition to be the first to reach Paris and more important, re-claim the Ritz.


Ernest Hemingway was determined to win the race. “Papa” at 45 effectively formed his own private company within the American Army. He had been going to the Ritz since he had arrived in Paris during the 1920’s and had but enough money for a couple of drinks at the bar.


What I had not known before reading the book was the number of women war correspondents who covered the war. Several had been in as much in action as any of the men.


The relationships of two female journalists with Hemingway involved as much intrigue as any war story. As 1944 unfolded Hemingway’s marriage to Martha Gellhorn was swiftly deterioriating and Hemingway had entered into an affair with Mary Welsh.


In the final rush to Paris Hemingway famously said he intended to liberate the cellars of the Ritz. His arrival at the hotel on the day of the liberation of Paris was appropriately dramatic and he took charge of the hotel and the finest wines were opened. Hemingway was to start each day at the hotel for the next seven months by opening a bottle of fine champagne.


The famous kept coming. A month after liberation Ingrid Bergman arrived at the Ritz and became the lover of famed war photographer, Robert Capa.


The word “fabulous” has been overused but it best describes the Ritz of that era.


Mazzeo portrays a Hotel of grandeur and unsurpassed elegance. Within its rooms, salons, bar and restaurant passed everyone who mattered in Paris. Generation after generation of the elect in France made sure they were seen at the Ritz.


There is a good movie to be made with the dramas of the rich, famous and beautiful unfolding in a beautiful hotel.


The Hotel on Place Vendome is well written. In a couple of chapters it tries too hard for drama but Mazzeo’s life of the Ritz has made me wish I could visit that grand hotel which re-opens this summer after a 2 year renovation.
Posted by Bill Selnes at 11:09 PM