A Killing in Zion by Andrew Hunt 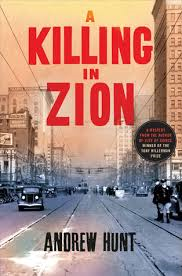 (26. – 868.)  A Killing in Zion by Andrew Hunt – In the broiling summer of 1934 Detective Lieutenant Art Oveson is chosen to head the new Anti-Polygamy Squad of the Salt Lake City Police. Mayor Cummings has decided to take a stand against the barely private polygamists in his city.


It will not be an easy investigation. While a breakaway sect, the Fundamentalist Church of Saints, espouses polygamy they are careful to publicly maintain only one wife. Secretly the leaders are sealed to numerous other women.


Oveson, a devout Mormon, supports the position of the Church of Jesus Christ of Latter-day Saints which disavowed polygamy in 1890 as one of the conditions of statehood for Utah.


Along with “most modern Mormons” Oveson scorns the polygamists:


Reasons for this powerful dislike were numerous. The simplest explanation, the pat one, was that polygs made a mockery out of marriage and family. Yet in my more reflective moments, I was willing to concede that my hatred for the men in my slide show was rooted in my inability to come to terms with the lives of my ancestors. Not so long ago, my great-grandparents on both sides engaged in plural marriage, practicing the same custom as the men I now detested.


The book caught me by surprise. I did not understand before reading the book that the current issues with plural marriages were already present in 1934.


The leader of the Fundamentalist Church in A Killing in Zion is LeGrand Johnston, “Uncle Grand” to his followers. Considered a prophet by the members of his Church he follows a daily routine visiting women who deny being his wives and tending to Church business. It is a good life at 79.


Oveson is spending his days and evenings following Uncle Grand hoping to see evidence that would support charges against the aging prophet.


One night after Uncle Grand has met with his apostles he returns to the Church containing his office. He is accompanied by his driver / bodyguard.


Oveson and another member of the squad, his friend, Roscoe Lund, are startled when they hear shots fired in the Church. They rush inside to find Uncle Grand and his bodyguard dead. They have been shot.


While searching the building the police find a terrified young teenage girl in a closet. She will not speak to them. Oveson, unsure of her role in the evening but unwilling to have her taken to the Utah State Industrial School, takes her home. He fails to notice she is wearing a silver wedding ring.


Oveson’s wife, Clara, pregnant with their third child, is unhappy that he has not consulted in her advance. When she finds out the alternative is the grim state reformatory she readily agrees the teenager can stay with them. No matter how hard they try the Oveson’s cannot get her to say or write anything.


With apostles and church members refusing to provide statements the investigation is barely progressing. Oveson is able to learn there are divisions with the Fundamentalist Church.


An ill-fated decision is made to arrest the 11 living apostles of the Fundamentalist Church and question them aggressively with the expectation they can get one or more to crack and provide the information needed to solve the murders.


The interrogations do not go well. In addition to their innate unwillingness to answer the police their lawyer, Granville Sondrup, counsels them to be silent.


The unjustified arrests produce a public outcry that predictably leads to political pressure from City Hall to blame allegedly headstrong police officers for the fiasco.


Oveson is an honourable man. There are not many in current crime fiction. He neither swears nor drinks alcohol nor consumes coffee nor abuses drugs. He is true to his Mormon faith and loves his family and greatly enjoys ice cream with his wife as a treat. He goes to work secure in the knowledge he has a happy family who will be glad to see him in the evening. I admire him.


His best friend on the police force Roscoe is irreligious, a hard drinker, swears constantly, has no family, engages in brief liasons and is deeply depressed. Oveson, seeing a loyal man who can be a good police officer, does not condemn Roscoe and works hard to keep the self-destructive Roscoe on the force.


As they work to solve the crime there is not a lot of mystery. What drew me along were the characters and learning about Mormon life and history. I did not realize how little I knew about Mormons until I read A Killing in Zion.


Hunt is convincing in his portrayal of life and murder in Salt Lake City of 1934. I would like to read more of Art Oveson.


A Killing in Zion is the 4th book I have read from the shortlist for the 2016 Arthur Ellis Award for Best Canadian Crime Fiction Novel. (June 22, 2016)
Posted by Bill Selnes at 8:59 PM