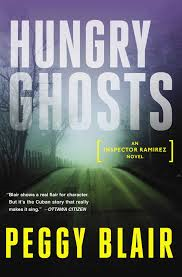 Hungry Ghosts by Peggy Blair – Ghosts of murder victims are appearing to Inspector Ricardo Ramirez in Havana. They never speak but do gesture to him. He has been haunted for some time:

For years, Ramirez had been shadowed
by ghosts. His Yoruba slave
grandmother  had prophesized that
messengers would come, sent by Elegua,
the god of the crossroads. They began to
appear shortly after Ramirez's
promotion.


The title comes through a conversation Ramirez has with Dr. Yeung from China:


"I am a Taoist, Inspector Ramirez," said Yeung. "We believe
animals have souls. And we believe there are three kinds of
ghosts. There are orphan ghosts, who have no children to
honour them properly. There are the ghosts of those who die
violently, who sometimes come back for revenge. And then
there are the hungry ghosts, the ones who can't feed themselves
enough no matter how hard they try. Most murdered women are
hungry ghosts.


As the book opens he is dealing with the murder of a clearly well-to-do man, probably a foreigner. No identification had been found.


Before he can investigate he is called to the Museo Nacional de Bellas Artes where a bomb threat has forced the evacuation of the building. While emptied of people someone has defaced with red paint five portraits from a collection of Italian masterpieces on exhibition.


A short time later the ghost of a young woman appears to Ramirez. A prostitute, she has been manually strangled and then had a stocking tied around her neck. Ramirez is reminded of an earlier murder of a prostitute.


At the same time, mid-winter, in northern Ontario (the real life location is hard to understand) the body of a woman has been found on the Manomin Bay First Nation. A barricade built by the members of the band to protest the re-opening of a mill near the reserve is keeping non-residents, including police, from the reserve.


Charlie Pike of the Ottawa Police is a member of the Manomin Bay band. He is dispatched north to investigate the crime because the protesters will let him through the blockade.


For some time the Highway Strangler Task Force has been identifying connections between murdered women and want to know if this victim fits the profile. The deceased is different from the women listed by the Task Force. They were all indigenous. She is white.


The Canadian section of the mystery draws upon a national search for missing and dead indigenous women. A Royal Commission of Inquiry is about to delve into the issue.


In the autopsy the cause of death is manual strangulation.


In Cuba Ramirez copes with the frustrations of life in a desperately poor country which is regressing as a nation. Shortages abound. Corruption is increasing. The socialist dream is descending into nightmare.


Back in Canada, as he investigates on the reserve, Pike is drawn back to his youth and the brutal residential school he endured.


On his reserve a strong connection remains to Ojibway traditions.
I appreciated how Blair deals with the details of life for Ramirez and Pike outside their police work. I was drawn into their lives.


As I read I wondered how Blair was going to connect murders in big city Havana with murders in rural Canada. It is a challenge to draw to together multiple investigations, there are three in this book, but Blair credibly puts them together.


The book highlights the ongoing consequences across Canada of the damage done to Indians who attended residential schools.


I did find the book preached at times. All of the indigenous Canadians in the book are victims. All of their problems are traced to residential schools and government actions with regard to their lands. I have dealt through my legal career with the issues of indigenous Canadians. Not all of them are victims. For those with problems, the causes are not as simplistic as the book.


While I tired at times on how indigenous lifestyles were portrayed it is a very good book.


Ramirez and Pike are wonderful characters. I am not found of spirits in mysteries but the ghosts about Ramirez do not detract from the investigation and do not solve the mystery. Pike has no ghosts but he has unresolved issues from his youth when he narrowly escaped from a life that had him on a path to prison.


While titled an Inspector Ramirez mystery it is about Ramirez and Pike. I hope they are both in Blair’s next mystery. I would like to spend more time with them.


Hungry Ghosts is one of the five books that formed the shortlist for the 2016 Arthur Ellis Award for Best Canadian Crime Novel.
Posted by Bill Selnes at 8:13 PM