The Storm Murders by John Farrow 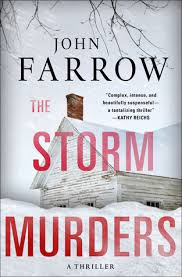 (24. – 866.) The Storm Murders by John Farrow (psudeonym of Trevor Ferguson) – Two members of the Surete du Quebec are called to a farm house near Montreal just after a fierce snowstorm. As they enter the house they can see from the undisturbed drifts no one has entered or left the house that day.


Inside the house they find the husband dead downstairs. Searching upstairs they find the wife badly wounded. When no gun is near her they know it was no murder / suicide and realize no one has left the house but there is no one else in any of the rooms. They call for assistance.


As one officer looks out of the bedroom door he is shot and when his partner reflexively looks out he is shot.


When backup arrives they find four bodies and no sign of any footprints leading away.


What has happened to the killer?


FBI special agent, Rand Dreher, calls upon retired Sergeant-Detective, Emile Cinq-Mars, who is living near the murder scene. He wants Cinq-Mars to serve as a consultant to the FBI. The murders in Canada follow a pattern of some American killings.


Dreher hopes Cinq-Mars, a legend in Quebec, can help with the investigation.


Cinq-Mars accompanies a former colleague, Sergeant-Detective Bill Mathers, and Dreher to the crime scene. Through his powers of observation, unlike the usually forensic dependent current detective, he works out what has happened in the farm house. It is simple but clever.


As common for me in crime fiction I had not figured out how the murders were committed though I had full access to all the information needed.


Cinq-Mars hesitates to do more. His much younger wife, Sandra, is unhappy and their marriage is in trouble. He decides on a unique form of marital therapy. He will share with her everything he learns in the investigation. He is no longer a police officer. He has no oath of secrecy.


Sandra’s participation added intrigue to the book. She does not become an investigator. She does think about the evidence and adds her suggestions. What happens to Sandra provides a vivid illustration of the risks of murder investigations by spouses.


The investigation takes them to New Orleans where they meet a large flamboyant New Orleans detective, Marcus Dupree.


While I wish I were a better armchair deducer there was an important issue with regard to the murdered couples in Quebec and New Orleans that was immediately obvious to me but not to the investigators. It was recognized far later than plausible.


It is inevitable that a book featuring a brilliant middle aged Quebec detective will invite comparisons with Armand Gamache of the mysteries written by Louise Penny. Cinq-Mars and Gamache are certainly not identical but they could have been cousins. I appreciate older sleuths whose analytical skills are more important than their physical prowess.


Aspects of the Hollywood style conclusion challenged credibility but I thought it a very good book. The inventiveness of the murders drew me into the book. Most modern murders lack believable ingenuity.


The Storm Murders is the 3rd book I have read from the shortlist for the 2016 Arthur Ellis Award for Best Crime Fiction Novel.
Posted by Bill Selnes at 10:29 PM