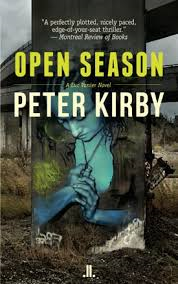 Open Season by Peter Kirby – Detective Inspector Luc Vanier, normally quick and decisive, is tentative about buying a condo. Vanier and his girlfriend, Anjili Segal, have decided to move in together but Vanier is having trouble deciding on which condo. Each one they view is flawed. While his love of Segal is strong he is inwardly hesitant about the commitment to living together.


While Vanier and Segal are dining and discussing condos he is called to a kidnapping. A woman has been abducted outside a restaurant and the lawyer, Roger Belair, who was meeting her has been injured.


As Vanier and Detective Sargeant Saint Jacques begin their investigation there is little information. The lawyer knows little more than her name was Sophie Luna. She is a Guatemalan journalist who has sought and been denied refugee status in Canada.


At the same time Katya Babyak is beginning a secret journey from the Ukraine to Canada. With four other young women they are being smuggled into Canada.


Vanier is puzzled by the kidnapping. Why would a woman facing deportation be kidnapped? There can be no money for ransom. She has no prominent friends or relatives in Canada.


The case becomes a high priority when Belair is murdered in the emergency area of the hospital while under police guard. Unfortunately for Belair the guard was pre-occupied with taking an hourly break and left Belair unprotected.


Katya eventually reaches Montreal where she is held captive and forced to be a prostitute.


The investigation leads them into the murky world of refugee claimants seeking to remain in Canada. Being granted refugee status in Canada has become more difficult. Once denied many claimants retreat to an underworld of the desperate seeking by any means, legal or not, to stay in Canada. If they are caught by Canadian Border Services they will be swiftly deported.


It turns out Luna has one precious commodity – documentation on a fraudulent business deal – but it is clear the information was neither on her when she was kidnapped nor is it at her apartment.


The investigation is meticulous. Leads are followed carefully. Vanier and Saint Jacques weigh all information and diligently pursue new lines of investigation.


The book is well plotted. There is neither an easy nor an impossibly difficult note to the resolution. How Vanier and Saint Jacques determine why Luna was kidnapped is as intelligent a police procedural as I have read in sometime.


The ending appeared out of character for Vanier. The lone lawman intent on personal justice is not a Canadian concept. Thankfully the body count was modest.


I had a reservation about two matters with regard to the book and will discuss them in my next post.