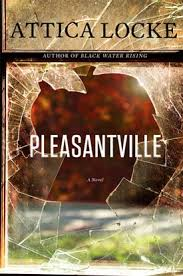 Pleasantville by Attica Locke – It has been some time since I read a work of legal fiction that comes as recommended, even hyped, as Pleasantville. Winner of the 2016 Harper Lee Prize for Fiction it has drawn great praise. I try not to read the opinions of a book before I read so I am not affected in reaching my own conclusion but it was impossible not to know Pleasantville is highly regarded. I will not require readers to wait until the end of my review. I consider Pleasantville an excellent book deserving of its recognition.


Jay Porter has been suing the massive corporations of Texas and the southern United States for over 20 years. As the book opens in 1996 he is barely practising law. Since his wife, Bernie, died from a lingering illness a year earlier he has lost the drive that made him a very successful lawyer. He has spent a lot of time since her death brooding about the time he spent away from home trying cases.


Jay, his teenage daughter Ellie, and pre-teen son Ben are trying hard to adjust to life without Bernie. I had a catch in my throat as they dealt with a tree for Christmas.


He has gradually reduced his caseload to a single class action against a giant chemical company. Two explosions at the ProFerma plant caused massive destruction in Pleasantville. While a huge action Jay is going through the motions. The case is barely moving.


Beyond the court action the major news in Pleasantville is the pending election for Houston mayor. Alex Hathorne, son of Pleasantville patriarch Sam “Sunny” Hathorne, is in a run-off  as he seeks to become the first black mayor of Houston.


It is a fiercely contested election with District Attorney, Sandy Wolcott, challenging Hathorne. She is aided by political operative, Reese Parker, who is pioneering the aggressive tactics that put George W. Bush in the White House four years later.
Amidst growing community discontent over the pace of the class action and the election dramas a teenage girl, Alicia Nowell, goes missing in Pleasantville. She is the third teenager to be abducted in a couple of years. The previous two girls have been found murdered.


The investigation into the murder is proceeding slowly when Axel’s campaign chair, his nephew Neal Hathorne, is summoned for questioning. Unwilling to explain where he was when Nowell was taken Neal is charged with murder.


Is the prosecution politically motivated? Is Houston’s elite ready for a black man to lead the city?


A reluctant Jay takes on Neal’s defence. He has not handled criminal law since early in his legal career. He opens the proceeding with a clever application that puts the prosecution on the defensive.


Locke creates an interesting trial but it is not a strong case against Neal. To me, as a lawyer, I was surprised Neal was prosecuted on the evidence described in the book. It is a dilemma facing all writers who write about a trial. Overwhelming evidence and there is no credible defence. Too weak and the result is inevitable. I doubt many readers will notice the strength of the State’s case in Pleasantville except where the issue is noted in the book.


With relatively weak evidence Locke has the case take an unusual, even bizarre twist that was the weakest point of the book. Locke, a television producer and writer including the series Empire, appears to have felt the need to add a jolt of drama that was unneeded. It was the only moment in the book when I felt I was reading a scene from an American television show. Overall, I was impressed with Locke’s skill in writing a legal mystery when she is not a lawyer.


I focused on Jay. The 46 year old is dealing with a profound personal loss while raising two children and maintaining his law practice. I can relate to his situation. It is hard to meet the demands of being a lawyer when your mind is not on your files.


What made the book special was Pleasantville. It is far from the ghetto. I cannot recall reading another book about a prosperous black (the book uses black rather than African American) community. My next post will discuss Pleasantville. The setting is crucial to the plot.


Locke drew me into life in Pleasantville and the lives of its residents.
Posted by Bill Selnes at 9:42 PM