The Scottish Banker of Surabaya by Ian Hamilton 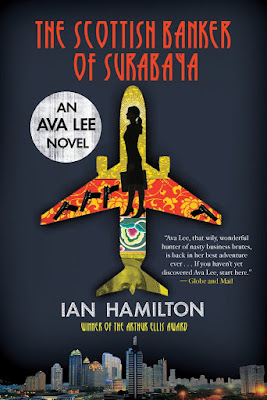 
Ava Lee has spent the summer at a lake near Toronto recovering from the wounds she suffered in The Red Pole of Macau. Physically she is doing well. Emotionally she remains fragile. She is wavering about returning to work with Uncle in “debt recovery”.


Her mother, Jennie, a professional level mah-jong player, has whiled away many summer hours at the Casino Rama near the lake. While there she has become friends with Theresa Ng who has a problem.


Jennie, skillfully using mother guilt, persuades Ava to have a meeting with Theresa. She explains to Ava that Theresa is Vietnamese Chinese and members of her family and other Vietnamese immigrants have lost over $30 million in an investment scam.


Ava learns the money is hard earned cash which the Vietnamese have never declared as income. They have been lured by a young Vietnamese accountant into investing in the Emerald Lion Company and promised a return of 10%.


They deposited the money through an account at the Bank Linno, an obscure Indonesian bank with a single branch in Toronto.


Suddenly there are no more statements, the young Vietnamese accountant has disappeared and the Bank has closed its Toronto branch. As the funds invested were never taxed the Vietnamese have not pursued the scam with Canadian authorities.


Ava is their last hope. While the debt recovery cases of Ava and Uncle usually involve greater sums Uncle agrees they should take on the case.


With her usual efficiency Ava wears an Adidas workout outfit and packs a carryon bag (two pairs of slacks, two dress shirts, one pair of shoes, toilet travel kit, bras, panties, three T-shirts, shorts and her favourite jade cuff links) and is off to Hong Kong.


While restrained in her packing Ava has the clothes to be stylish. She dresses for supper in in a way I believe my blogging friend, Moira, at her blog, Clothes in Books would appreciate:


Ava put on black lace underwear and a black push-up bra. She brushed her hair until she could see it gleam in the mirror, and then fixed it back with her ivory chignon pin. She had packed a pink shirt that was a particular favourite and she secured its cuffs with the green jade links. She left the top two buttons of the shirt undone to show her gold crucifix. Then slipped on her fitted black linen slacks and her Cole Haan black leather pumps … an extra touch of red lipstick and a little more mascara than usual … put on her Cartier watch.


In Hong Kong she is left uneasy after meeting Uncle. He is frailer and thinner while denying any medical issues. His driver, Sonny, and housekeeper, Lourdes, are concerned but they respect his intense privacy.


To follow the money Ava is soon on her way to Surabaya where the bank is headquartered. (Because of my lack of knowledge of Indonesia I did not know Surabaya is a city of four million people and the second largest city in Indonesia.)


In Surabaya Ava faces personal challenges greater than any confronted in the first four books in the series.


The violence quotient is diminished in comparison with The Red Pole of Macau but the violence which occurs is fierce and personal. The resolution of the case requires as much brain power as fire power with the conclusion forecasting a change in Ava’s life that sounds intriguing.

****
The Scottish Banker of Surabaya is the third book I have read for the 10th Canadian Book Challenge.