A Candle to Light the Sun by Patricia Blondal 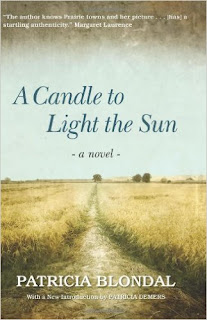 A Candle to Light the Sun by Patricia Blondal – The Great Depression of the 1930’s left millions unemployed and devastated the world economy. Its effects were magnified in rural Western Canada. In addition to the economic disaster engulfing the world the farmers and residents of small towns endured an almost decade long drought.


In fictional Mouse Bluffs, Manitoba, the setting for A Candle to Light the Sun the Great Depression lies heavy upon the community. Money is more often measured in quarters than dollars.


The residents are dominated by a rigid pride that hates obligation. No matter how poor they must be self-sufficient. Every decision must be weighed against its cost. The grinding poverty wears upon relationships.


An offer to young David Newman to join the better off minister’s family (Daniel and Solveg Backhouse and their daughter Lilja) for a two week vacation is reluctantly and grudgingly accepted. His parents’ sense of indebtedness is eased when the minister asks his father to check on the house while they are gone.


David’s mother, Muriel, refuses to see Dr. Gavin Ross about a persistent cough because of the cost. To let him examine her without charging is unacceptable.


Among those more lightly touched by the Depression are Dr. Ross and his wife, Christine. She is the granddaughter of the town’s founder, Richard Rashleigh, who had sought to re-create an English town on the prairie. They live in a large home, suitably grand for a member of the upper classes though they are its only members in Mouse Bluffs. Personal tragedy has crushed Christine. She cannot and will not find a way to move ahead with life.


Sharing the home is Ian Ross, a World War I war hero, who has bad lungs from mustard gas and is a paraplegic because of a bullet in his spine. As with many officers of his generation he is a very literate man. He spends his life waiting to die. While waiting his primary avocation is drinking.


At the other end of the spectrum is the Yeates family. Jack is an unsuccessful gambler and a mean alcoholic. His family lives in an abandoned store that would have been condemned in any other era. To pay off his gambling losses he sends out his wife, Phoebe, to visit the men to whom he owes money.


David has a dependant relationship with Darcy Rushforth, the privileged nephew of Ian and Gavin Ross.


And then one sweltering summer night with a prairie dust storm blasting through the town a series of events shatter Mouse Bluffs. The secrets of that night will blight the lives of all involved.


The book resumes with David in university in Winnipeg at the start of World War II. I can relate to his discomfort with city living after a life in a community where everyone knows you.


A Candle to Light the Sun deals with an unusual university dynamic which I have not read about in Canadian fiction. Male students are disappearing from campus as they join the Canadian military. There is an unease about the men left at home like David who feels a stigma that he is not part of the war effort even though physical issues have kept him out of the forces. Blondal’s insights into the lives of young men and women at university during the war are compelling.


The relationship between David and Darcy becomes even more complex as they seek independence in their lives after the war but decide to live together.


There were sudden gaps at times in the narrative. While reviewers at the time thought the two books in one worked well I think it would have been best as two full books. Why there may only have been one book will become clear in my next post.


Blondal has a wonderful descriptive power of both the land and personal relationships which will part of a third post. I knew she had grown up in a small prairie town even before I read she was born in Souris (the French word for mouse), Manitoba.


It is an excellent book about relationships, especially male relationships, that a reader, not knowing when it was written, might have thought it was authored this century rather than almost 60 years ago.
Posted by Bill Selnes at 7:19 PM