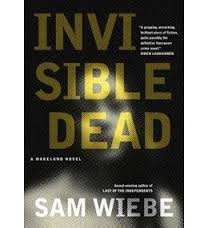 
Ed Leary Nichulls was serving eight counts of second-degree murder up in Ken. “Scrapyard” Ed lured runaways and prostitutes out to his family salvage lot, killed them, eventually, and eventually disposed of the bodies. He didn’t avoid the authorities for long, once they’d started looking. But that had taken years.


In real life Robert Pickton, a pig farmer just outside Vancouver, was convicted of killing 6 prostitutes on his farm. (Once convicted 20 more charges of murder were stayed. He was suspected of killing a total of 49 women.)


Having taken on the investigation of a long missing prostitute, Chelsea “Charity” Loam, Wakeland is interviewing Scrapyard Ed to see if he has any knowledge. It is a creepy conversation.


Wakeland is a tough private investigator based on East Hastings in downtown Vancouver. He had followed his father into the Vancouver Police Department but soon left. Discipline and orders are anathema to Wakeland.


Recognizing his non-existent business skills he has joined with the clever business oriented Jeff Chen. Where Wakeland is a P.I. Chen is a security consultant. Chen sees the business building a corporate clientele providing discreet services for difficult company situations. Wakeland can assure the suits of an appropriate physical presence in the firm.


Wakeland does have an addiction that limits his attention to corporate clients. He is devoted to handling at least one difficult personal case all the time.


Charity came from an indigenous background. Taken in by Gail Kirby she turned wild as a teenager. Choosing the streets and drugs led her to hustling and down to prostitution. Eleven years later her foster mother wants Wakeland to search for Charity and has $200,000 available.


There are no good places to look for a long missing prostitute. After learning nothing from the serial killer Wakeland goes down into the streets of East Vancouver.


He establishes a personal relationship with a source, Sharlene “Shay” Nelson, who is also reliant on drugs and prostitution.


Wakeland is a clever man. I have not encountered Greek philosophers in noir or any other sub-genre of crime fiction:


I put the flashlight in a grubby Canadian Tire bag and made my second trip down Alexander. Kid Diogenes, prowling the city with his lantern on a quest to find one honest man.


That quest includes a conversation Wakeland has with a famed local artist and lecturer on art:


They were missing the humanity with which I was trying to imbue my subjects – but then perhaps so was I. Perhaps I was so eager to become the Great White Protector, Champion of the Downtrodden, that I had done the exact opposite of what I’d intended.”


“Right,” he said. “Departicularize. It’s the only way to avoid all possible chance of misrepresentation.”

While his time is spent mostly on dark streets Wakeland is the rare tough guy P.I. comfortable in the rarified air of academe.


His life has been difficult. Not many damaged private investigators appeal to me but Wakeland is an engaging sleuth. His obstinacy is self-destructive but he is only moderately reckless. Though obsessed with finding Charity he has relationships. Family is a real part of his life.


I liked Wiebe’s debut novel Last of the Independents. The Invisible Dead is better.


I was glad to read the Invisible Dead is the start of a series.
Wiebe, Sam - (2015) - Last of the Independents and The Unhanged Arthur Award
Posted by Bill Selnes at 10:34 PM