The Whistler by John Grisham 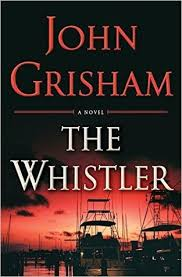 The Whistler by John Grisham – As usual Grisham had me hooked me in the opening pages. Once again he has created a fascinating lawyer in Lacy Stoltz, a staff lawyer with the Florida Board on Judicial Conduct. I have always found his strength to be his lawyers.


The Board investigates complaints against Florida judges. Much of their time is spent investigating complaints concerning judges who have personal issues that have rendered them incapable of judging properly. One of her current investigations is a judge whose alcoholism is affecting him on the bench. However, the allegations sometimes involve corruption.


Lacy and another staff lawyer, Hugo Hatch, drive to St. Augustine to meet a mysterious source who claims to have information on a corrupt judge on a vast scale. While skeptical the claim is overblown they have agreed to the meeting.


They meet Ramsey Mix, who has changed his name to Greg Myer, at a marina. A disbarred lawyer, Myer, has regained his licence to practise law. He is acting as an intermediary for a go-between who is representing a “mole” who has information on a circuit court judge in northern Florida.


None of the trio is altruistic. They expect to gain millions under Florida’s Whistleblower statute which pays informants who provide information that allows the State to recover illicit funds. At the same time the trio is very wary convinced that their lives are in danger if identified.


While the arrangement is convoluted Lacy and Hugo get enough from Myer to proceed with an investigation.


They soon learn that the judge is Claudia McDover and the corruption involves a casino owned by the small Tappacola Indian Tribe. Though the Tappacolas are modest in number the casino is a gusher of money. Each member of the tribe, excepting married women who receive half the regular amount, is paid a monthly dividend of $5,000.


The investigators wonder how McDover could be corruptly involved. The casino is on an Indian reservation with its own tribal court. Neither McDover nor the State of Florida have any jurisdiction on the reservation. The Federal Government has actually little interest in what is happening on the reservation.


McDover’s role comes from her position in the county adjacent to the reservation. She has a perfect record of deciding in favour of developers building golf courses, condos and other developments. She can also disrupt the casino for she has the authority to deal with issues involving the toll highway which is the only access to the casino.


The judicial corruption is connected to a shadowy group of developers. Myer advises they are the descendants of the Catfish Mafia, a loosely organized crime gang, which has moved to Florida and evolved into the Coast Mafia. Such is their discretion they are but a rumour to legal authorities.


Can Lacy and Hugo penetrate the carefully constructed web that conceals the corruption?


The conspiracy reminded me of Grisham’s book, The Firm, which was set in Memphis and involved a Chicago crime family.


I regret there is no action in a court. While I do admire his willingness to not restrict his stories to trials and appeals I prefer Grisham’s books involving court cases.


I enjoyed the book and was glad it was not one of his books with an overtly political point of view but it is not one of Grisham’s best.


There is a flaw in the story in that there are so few people who could be the “Deep Throat” source. In the Watergate scandal the source was never identified until he revealed himself because there were so many possible informants.


More troubling was the last third of the book. It was an unfolding of the inevitable. While I deplore implausible twists there was no effective drama to conclude the book. For the first time in a long time I felt Grisham was just writing a narrative in that portion of the book. It was a letdown.