Hanns and Rudolf by Thomas Harding 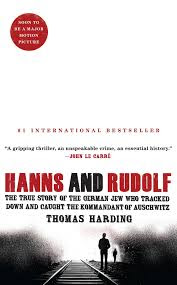 Hanns and Rudolf by Thomas Harding – I hesitated to purchase this real life hunt taking place just after WW II. My uncertainty came from the certain knowledge that I would read again graphic details of the implementation of the Holocaust at its most famous concentration camp. Each time I read about the Holocaust a mixture of anger, sadness and frustration leave me depressed. I decided to read the book as I find individual life stories help me to understand larger issues and events.


My review in this post and my next post contains spoilers. While I respect the author I do not care there are spoilers.


Lieutenant Hanns Alexander is a German Jew who had fled Nazi Germany before WW II and is a member of the British Army. He is after Rudolph Hoess who was the Commandant of Auschwitz.


Fair or not the focus of the book was bound to be Hoess. There would be little interest in the hunt for a mid-level SS officer if he had not commanded a concentration camp.


Born in 1901 Hoess joined the German Army at 14 in WW I and served in the cavalry stationed in the Middle East. His small unit never surrendered but led by Hoess rode and fought its way back to Germany.


He served in the right wing Freikorps after the war. While not overtly political he was impressed by Hitler and joined the party in 1922. He met and liked Heinrich Himmler. They bonded over a joint love of farming.


Hoess found employment on a farm estate in northern Germany and did well as he was good at management and organization.


In the early 1930’s he made a pair of fateful decisions. He joined the SS so he could manage a horse stable for the SS. Once he was a member of the SS Himmler asked him to work in concentration camp administration. Hoss agreed mainly because he thought promotions and increased income would let him buy a farm.


He carried out orders including summarily executing a fellow officer who let a Jew escape. Hoess explained his attitude about working in concentration camps after that execution :


I did adjust to all those aspects of concentration camp life that could not be changed, but my feelings were never dulled to human wretchedness. I always saw and felt it. However, I had to get over that if I was not to appear soft. I wanted to be thought a hard man in order to avoid being considered weak.


Rudolf had demonstrated to his superiors that he was capable of implementing their harshest orders. He as a most trustworthy officer of the SS. He had become a hardened instrument of blind loyalty.


Hoess was chosen to build and run Auschwitz. Determined to do his best he built and managed the camp with efficiency. Hoess was challenged by how to kill huge numbers of prisoners. When he helped devise the method of killing hundreds at a time in gas chambers, the means by which mass murder could be done, he wrote:


Now my mind was at ease.


He accepted, even believed, the Nazi doctrine that all Jews must be exterminated. He was not remote from the killing. He regularly witnessed the selection of Jews for gas chamber and their execution and the disposal of their bodies.


When his day’s work was done he would spend time with his wife, Hedweg, and their children in their comfortable home on the edge of the camp.


His conversion from simple farmer to mass murderer was voluntary. I find his story deeply disturbing.


Alexander, born in 1917, grew up in a prosperous Berlin family. His father, a doctor, owned a very successful medical clinic. They lived in a spacious apartment with 22 rooms. They were assimilated calling themselves “3 days a year Jews” for the number of times annually they went to a synagogue. Life was good for the Alexander family.


When the Nazis took over Alexander’s mother, Henny, more realistic than her husband, Albert, wanted to leave Germany. Albert, a decorated WW I veteran, thought life could be endured under the Nazis. By 1936 he understood life would only get worse and the family managed to get to Britain. The Alexander family were among 70,000 Jews from Nazi controlled countries who managed to get into England between 1933 and 1939.


Alexander was a low level banker in London when the war started. Together with his twin brother, Paul, he enlisted immediately. The British military, wary of even German Jews who had fled Germany, placed them in the Auxiliary Military Pioneer Corps. After three years they were trained as officers and joined the British Army in France in the summer of 1944.


Late in the war the British formed three small investigative teams to conduct war crimes investigation. There is no specific explanation for Alexander being chosen for one of the teams.


His relatively casual and carefree attitude changed when he arrived at the Belsen concentration camp and helped carry hundreds of bodies of prisoners to mass graves. He now hated the Nazis and became determined to hunt down Nazis involved with the concentration camps.


Rudolph Hoess who ran the camp that killed over a million Jews became his focus but not an obsession.


(My next post finishes my review of Hanns and Rudolf.)
Posted by Bill Selnes at 10:59 PM