The Idea of Canada – Letters to a Nation by David Johnston 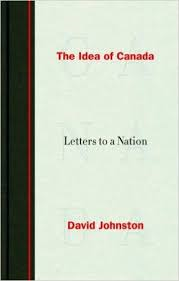 The Idea of Canada – Letters to a Nation by David Johnston - I recently read The Idea of Canada – Letters to a Nation. The book is composed of letters written by our current Governor General, David Johnston. I decided to write my review in the form of a letter to him that kept getting longer as I thought about the ideas in his letters. I mailed my letter to him a few weeks ago. I will be posting the letter over my next three posts


I received your book, The Idea of Canada – Letters to a Nation, as a Christmas present from my articling student.


I started reading it on the morning of December 27 and was immediately captivated by your letters to Canadians living and deceased.


I write many letters. All but a small fraction of them are written as a lawyer. Personal written communications (“letters” no longer seems apt) with my sons have come to be electronic (emails, texts and Facebook messages). I have a blog, Mysteries and More from Saskatchewan, in which I sometimes write to authors. In my emails to authors I have evolved from asking questions to making observations on their book and including a few questions. I continue that approach with this letter.


I am always interested in the writing process. Usually I write letters in either my work office or home office. From the book I know you write letters most often in the morning. As someone who struggles with morning my personal writing is normally done in the evening. Sometimes there is music around me. More often it is quiet. Do you require quiet around you to write or are you like my sons who concentrate better with noise, preferably music, about them?


Some of your letters have a length and complexity which suggests to me they were planned and researched. How often are your letters spontaneous and how often structured? How do you choose between the impromptu and the planned letter?


Your opening letter to the young Inuit boy who asked “who are you, anyway?” left me thinking about who I have become during my 64 years. I find it straightforward to narrate the facts of my life but much harder to say who I am. I will be reflecting on who I am through this winter.


That you are known by your grandchildren as Grampa Book is a wonderfully evocative phrase of who you are. They will have special memories of you through their lives.


While reading the letter to your Grade 10 English teacher, Ms. Wilkinson, who introduced you “to the power of words” I thought of Marion Sherman, a dietician and city councilor and television broadcaster, who worked hard to create the Wapiti Regional Library which has provided libraries in cities, towns and hamlets in my area of rural Saskatchewan. Regional library systems now cover the whole province. I can still remember going from Galabank, a one room country school, in the winter of 1960 when I was in Grade 2 to Ethelton and entering the basement of the school where the new regional library had opened. I had never seen a room full of books until that moment. On Marion’s retirement I wrote to her thanking her for introducing me to the wide world of reading.


You have a talent for words. I have spent my life, professionally and personally, devoted to words. In the word images you create and the discussion of ideas I was reminded me of the writing of Bart Giametti, another university President who left academe for a different position – Commissioner of Major League Baseball. Would you have known him and did his style of writing influence you?


I was struck by your statement to the question of what makes an effective leader:


I tell these people, as I’m telling you now, the one fundamental element of my leadership equation is a simple one: the best leaders build on the positive and manage the negative.


Your use of letters to encourage and other means of communication to criticize or correct reminded me of another prolific letter writer, former U.S. President George H.W. Bush. He personally typed on his own typewriter thousands of letters containing positive messages.


In your letter saluting John McCrae, the Canadian military physician, who wrote In Flanders Fields during World War I you believed his motivation to write poetry during war included “the desire to create something of lasting value when all about him was being ripped apart”. I thought of Anthem for a Doomed Youth, a book of poems by soldier poets, including McCrae, from the Great War. I know educational opportunities were more limited early in the 20th Century. At the same time those young soldiers were examples of a generation that valued literate imagination. I have not read comparable poems from the soldiers of the 21st Century. Contemporary society will value poetry in the lyrics of music but I fear current Western culture has separated the poet from the soldier.


On your letter to members of the Canadian Armed Forces you recalled speaking at the Vimy Ridge monument in 2012 on the 95th anniversary of that World War I victory for the Canadian Army. My wife, younger son Michael and I were at the site a year earlier.


I found it a profound and powerful experience. The soaring monument, the sweeping walk up the ridge and the current serenity of the site provide a perfect setting of remembrance.


I was too young, when I was growing up, to appreciate that there were men from Meskanaw, my small home community, who had fought in that battle.


Michael had come to understand the sacrifices of Canadian soldiers when he was an exchange student in Germany in 2004 after high school. With a friend he made a day trip from Dusseldorf to see the museum in Arnhem about the failed attempt of British paratroopers to capture the city’s bridge over the Rhine. Before returning they visited an Allied cemetery and came to realize most of the soldiers were their ages of 18 and 19. He had not realized armies are filled with young men.


I wish every Canadian would go to Vimy. My visit made me proud to be a Canadian. As 2017 marks the 100th anniversary there is a special opportunity for Canadians to go to Vimy.

(The second part of my letter will be posted in a couple of days.)
Posted by Bill Selnes at 8:52 PM