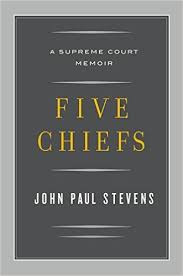 (16. – 903.) Five Chiefs by John Paul Stevens (2011) – Retired United States Supreme Court Justice, John Paul Stevens, reflects on the USSC by focusing on the men, to date they are all men, who have been Chief Justice of the Court. In his long legal career as clerk, litigator and judge he has personal experience with the last five Chief Justices.

He began his direct contact with the Court in 1948 when he was a clerk for Justice Wiley B. Rutledge.  At that time Fred Vinson was the Chief.

Earl Warren was the next Chief. Stevens appeared before him as a practicing lawyer.

He served as an associate Justice of the Court when Warren Burger, Bill Rehnquist and John Roberts were Chief Justice.

It is remarkable that he has personal knowledge of almost one-third of the Chief Justices. There have been 17 during the history of the Court.

Stevens is a forthright scholar and writer. He has the knack of distilling complex legal arguments to their essence, often in a few sentences. It is a skill that I wish the current American and Canadian Justices of our respective Supreme Courts would use more often in writing judgments. So many judgments go on at great length seeking to explain, justify and inform on broader legal principles rather than limiting their judgments to the direct legal issues of the appeal.

I was struck by Stevens description of the collegiality of the Court. After reading The Brethren by Bob Woodward and Scott Armstrong I was left with the impression there was a lack of collegiality at the Court.

Stevens provides a powerful anecdote on how the Justices interacted. He stated that in over 30 years of conferences (meetings to discuss and vote upon cases) no Justice had ever raised their voice. He sets out in the book there were strong differences between the Justices in their legal philosophies, as reflected in their judgments, but there was always respect.

The American Supreme Court and, I expect the Canadian Supreme Court, are models for politicians on how major public issues can be considered and vigorously debated without descending to personal invective and disrespect for those with whom you disagree on issues.

Stevens speaks of a tradition that reinforces their personal respect and friendship for each other. Before entering the courtroom to hear oral arguments the Justices all shake hands.

On the judicial philosophy spectrum Stevens and the late Antonin Scalia were often far apart. Personally, Stevens speaks of his good friend Nino.

Politicians and media – left and right – often speak of the judicial future of the Supreme Court in apocalyptic terms. You would think the end of the nation is upon America because of the composition of the Court.

Certainly, the Court has a major role in the United States but perhaps it is Stevens’ perspective of the Court as a 200 plus year old institution that he avoids such rhetorical excess.

He sets out his opinions on decisions he considers rightly and wrongly decided but usually does not venture into a discussion on their implications for the nation.

His examination of historic decisions demonstrates rarely are judgments on issues fixed for all time.

Where the Court upheld segregation late in the 19th Century just over 50 years later the Court unanimously moved America down the road to integration with Brown v. The Board of Education. He goes on to show how America would have been better served had the Court simply directed trial judges to implement their decision. A subsequent Supreme Court decision directing integration to occur with "all deliberate speed" effectively set up an approach to resisting integration.

In his consideration of the role of the Chief Justice he shows how the Chief Justice is a first among equals. His vote on an appeal carries no greater weight than the other eight Justices. There is some deference in the process of decision making as he is the designated leader of the Court but not when the moment comes to vote on the disposition of an appeal.

I think the most significant roles in decision making by the Chief Justice involve his management of the conferences and his responsibility, when he is in the majority, to assign to a Justice the writing of a judgment.

Stevens explains that the tradition of identifying Courts by the name of the Chief Justice is often misleading. More apt would be to look to the Justices whose votes are the swing votes on closely divided issues. Their votes actually control the judicial direction of the Court. Were such an approach in place the current Court would be called the Kennedy rather than the Roberts Court.


As this review indicates I found more interesting Stevens’ thoughts on major decisions and the actual functioning of the Court than I did in his analysis of the five chiefs and the earlier 12 Chiefs. Those analyses, especially of the first 12, were but moderately interesting for me. For a reader without a background in the history of the Court his examinations of the Chiefs would be a good primer. I do wonder whether Stevens’ generous nature and clear love of the Court may have limited his observations and opinions.
Posted by Bill Selnes at 11:14 PM