Birds of a Feather by Jacqueline Winspear 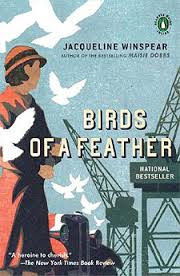 As I am kind of plodding in my reading of the Arthur Ellis shortlist for the 2017 Award for Best Novel so I have looked back over some reviews from almost a decade ago that I have not posted. Re-reading my review of Birds of a Feather by Jacqueline Winspear, the second in the Maisie Dobbs series, reminded me how much I love that series.

****
26. – 436.) Birds of a Feather by Jacqueline Winspear – Maisie Dobbs, Psychologist and Investigator, is doing well as the Depression lays hold to England. She is retained by Joseph Waite to find his daughter, Charlotte, who, in her early 30’s, has run away again. Waite, a wealthy owner of a chain of grocery stores, both attracts her with his devotion to his store and employees and repels him with a feudal attitude towards women. Maisie’s assistant, Billy Beale, continues to suffer from the gassing and leg wounds suffered in WW I. While concerned over his physical well being she is disconcerted by shifting moods. Billy is the rare aide to a female detective. Many male fictional detectives have their devoted assistant. Women have traditionally operated alone. The investigation turns darker when Maisie determines a pair of Charlotte’s closest friends from the time of WW I have been murdered by the same person. A key clue is a small white feather found on each victim. As she seeks out the solution the feathers lead back to WW I. Along the way we see her challenged in her personal relationships and forced to consider the personal reconciliations she urges on clients. A great English T.V. series is bound to come from the novels. Maisie is a wonderful character. I do not like to read books by the same author too quickly as it lessens the enjoyment but I had to read another adventure of Maisie and was not disappointed. Paperback by choice. (June 27/08)
****
I think I am going to have to read another in the series this year.
Posted by Bill Selnes at 10:35 PM