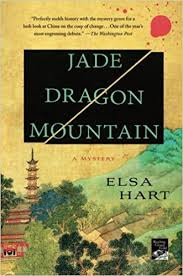 (40. – 927.) Jade Dragon Mountain by Elsa Hart – Since I began blogging random purchases of crime fiction have become infrequent. There are many excellent authors whose books I read regularly. In addition there is an abundance of recommendations from fellow bloggers. Thus it was a fortuitous accident that I picked up Jade Dragon Mountain in a Saskatoon bookstore. The cover attracted me. While I do my best not to judge a book by its cover a well designed cover can get my attention. Reading a couple of pages drew me into the story and I bought the book. It was my best accidental purchase of the year.

In 1708 former imperial librarian Li Du, exiled from Beijing for being the friend of traitors enters the city of Dayan (now Lijiang) in what is now known as the province of Yunan. The city is near the border with Tibet. Since becoming an exile he has been a traveling scholar following the journeys of famed Chinese travel authors. His cousin, Tulishen, is the Magistrate in Dayan.

Li Du arrives at a time of great excitement. The emperor is coming to Dayan preside over a solar eclipse as Commander of the Heavens:

The Emperor of China had the power, according to ancient tradition, to predict astronomical phenomena. Displays of this power confirmed the Emperor’s divine legitimacy, the more effective the demonstration. Members of the intellectual elite, of which Li Du and Tulishen numbered, were aware that for many years it had been the Jesuits at court who had provided the Emperor with a yearly calendar of astrominical events. Naturally, public acknowledgement of their role was forbidden, as it would tarnish the pageantry of the Emperor’s predictions.

For almost a year the Emperor has been on a grand tour from Beijing that will culminate with the celebration of the eclipse.

While the Emperor has severely limited foreigners from entering China and kept trade at a minimum there are constant efforts to open up China.

For the celebration in Dayan a pair of Jesuits and, Sir Nicholas Gray,  an ambassador for the British East India Company have come from India.

One of the Jesuits, the elderly Brother Pieter, is a skilled astronomer who had spent several years in Beijing.

Gray is hoping to convince the Emperor to allow the Company trading access to China. Gray brings numerous gifts including an amazing tellurion, a device that depicts heavenly bodies in their orbits.

Joining them is a marvelous Arab storyteller, Hamza, who beguiles audiences with a never ending series of stories.

Li Du, uninterested in the great celebration, prepares to leave Dayan when Pieter dies suddenly in his room. Despite official protestations Li Du can tell the Jesuit’s tea was poisoned.

Magistrate Tulishen would be content with Tibetan traders, who have already left Dayan, being blamed. Tulishen wants no disturbance of the celebration as he hopes his successful management of the event will lead him to be promoted to a higher post in Beijing. Li Du initially accepts the whitewash but cannot abide the coverup and returns to Dayan to investigate the murder.

Through Hamza’s clever use of rumour the Magistrate is forced to let him investigate but Li Du is given but 3 days to solve the murder.

As he investigates there emerges a dangerous and subtle plot that could change the future of China.

While the Westerners want an open China there are many Chinese who feel there is nothing to be gained from open borders. They have contempt for the Europeans.

With intelligence and persistence Li Du gradually uncovers the secrets of each of the main characters. The book is filled with well drawn and interesting people.

Jade Dragon Mountain is a mix of historical and crime fiction that I find irresistible when it is done this well. Hart drew me into the life and times of early 18th Century China. Li Du in the bustling Dayan reminds me of Rudyard Kipling’s Kim in India. They are both inquisitive, clever and determined. While Kim is caught up in the Great Game of espionage Li Du navigates the complexities of rural and imperial Chinese society and bureaucracy.

I gained a feel for the China of 1708 in the same way I feel comtemporary China 300 years later in the Inspector Chen mysteries of Qiu Xiaolong. Both Li Du and Chen are unusual men as they are not caught up in the national striving, prevalent in every generation, for greater power and position and wealth. They leave superiors uneasy for they are not susceptible to the temptations that make most men vulnerable to pressure and manipulation.


And I guarantee the ending will be a surprise.
Posted by Bill Selnes at 10:13 PM