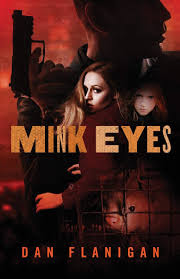 Mink Eyes by Dan Flanigan - In the fall of 1986 Peter O’Keefe, a Vietnam veteran, seeks to avoid a return to the haze of drug addiction with the aid of alcohol, exercise and work. His 10 year old daughter, Kelly visits him on weekends. She loves her Dad and worries about his future. She is beautiful and he worries about her teenage future. He lets work interfere with their slight time together.


He has a private investigation firm. The lovely Sara is efficient in the office and aspiring to be an investigator. The firm is struggling to complete all its contracts. In a situation familiar to me, as a partner in a small law firm, O’Keefe would like to stop taking new cases for awhile but he needs to keep the “pipeline” full to meet the overhead of the firm.


He enjoys the classical, both literature and music.


He is agonizing over whether to enter contracts with major companies to do drug testing. He accepts his business is all about invasion of privacy but is uncomfortable as the testing is “just chemistry versus the workingman’s piss”.


One of his best sources of work is Mike Harrigan, a friend since childhood, a lawyer driving to build a big firm to fill the floor of the skyscraper he has leased and the floor below on which he holds an option.


Harrigan calls him to a meeting at the firm. His elegant office is designed not to impress but to intimidate clients and other lawyers.


I have been in those offices in the big cities of Canada. I never found them intimidating. The more stylish the furnishings, the more impressive the artwork, the longer the conference table the more I thought the setting is but decor. Who sits behind the desk or at the head of the conference table determines if there is intimidation. When the trappings are ostentatious the man or woman behind the desk may be under an illusion that their office projects power. Many of the personal offices of the most powerful lawyers I have met are modest in size, simple in design and cluttered. They know it is their legal skills and presence and reputation that are intimidating. Maybe the office intimidates clients.


O’Keefe is hired to investigate a mink farm that appears to be a Ponzi scheme.


He travels into the country to the farm which has clearly run out of money. Lenny Parker, the huckster businessman who enticed the investors, has disappeared.


His beautiful wife, Tag, is in the process of leaving when O’Keefe arrives at their opulent home.


Bodies start dropping as a pair of thugs with an unknown agenda arrive upon the scene. Tag flees leaving O’Keefe in despair. He retreats to the city.


He slips into self-pitying drunkenness. Getting drunk while Kelly is with him is embarrassing.


O’Keefe could be a 21st Century Travis McGee but his mood swings are too intense. It was jarring how O’Keefe oscillates between being an excellent investigator and competent businessman to being an uncaring drunk.


His investigation becomes a quest. A “lone knight errant” on a mission. Few quests in medieval days or current times end well.


Flanigan is gifted with language. His images are vivid and the dialogue lively.


At the same time it grated upon me the simplistic portrayals of the rural residents. They are stereotypes. The Sheriff is a “demented yokel”. The city people are multidimensional and the country people are one dimensional.


Mink Eyes is a good book. It had the potential to be an excellent book. Decreased dysfunction.  Less brooding. A greater presence for Kelly. (She may be the most interesting character.) Some depth to minor characters. Fewer people defined by their appearance.


I hope Flanigan, a fellow lawyer, writes another novel. I think he could craft a compelling legal mystery with Harrigan as lead character assisted by a capable O’Keefe. (August 14, 2019)
Posted by Bill Selnes at 10:19 PM