47 Days: A Journey Back Home by Amanda Perrot 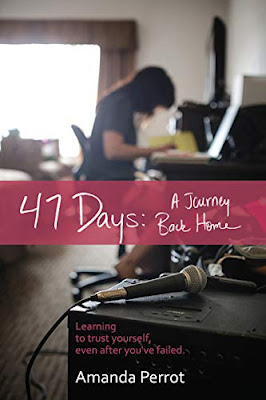 47 Days: A Journey Back Home by Amanda Perrot - It was a journey of “self-discovery” for Amanda around Saskatchewan in the summer of 2018.

She grew up in St. Brieux, a community of 600, about 40 kilometers from Melfort. I know some of her family. I bought the book from her after she spoke to the Melfort Rotary Club of which Sharon and I are members.

She had done well in high school, earned a degree at university, found a good job as a geologist in Calgary, paid off debts, fell hard for Matt and married him. They returned to St. Brieux and bought into her mother’s business and then the marriage, the relationship which had flowed so easily, failed.

Amanda speaks of Matt not listening and of Matt talking of wanting to stay together but not acting on the words.

She was a bruised soul after the breakup. She went through a winter of endless reflection. In her mid-30’s she was seeking a way to move forward. A text about a rental truck inspired her to make a trip around Saskatchewan in her truck and promoting her business, Grounded Goodness. Two of her leading products are decals and tee shirts.

One of her tee shirts reflects a part of her personality. It reads:

Our mission is to spread goodness and we recognized that sometimes to be the most kind, you need to be blunt!

On her journey she wanted to meet women who:

“.... will have gone through some shit in their lives lately. They will be figuring out how to regain confidence. They will be craving connection with other like-minded women, to know that they’re not alone.”

She names the trip Saskatchewan Sisterhood: The Power of Women’s Voices.

She begins her journey in Melfort at the park named for her niece, Dayna, who died at 3 from cancer. The loss is still deep in Amanda. I remember the pain at that funeral.

Having spent my life in Saskatchewan I can see all the places she visited.

Not many write of the people of rural Saskatchewan. Amanda writes of the openness and directness of the women of our province. There is not as much as I expected about their rural lifestyles. There is a lot about Amanda’s life in the country.

Her book reflects the vast spaces of Saskatchewan, the hours it takes between destinations, the need to be comfortable with being by yourself. During the 47 days she travels 5,820 kilometers around Saskatchewan.


She experiences emotional highs and lows every day of her journey. Her mood swings from ecstatic to depressed and back again.

The journey is focused around presentations to which women are invited to come and listen and talk.

What is most interesting is reading of the interactions with the women who come to her presentations. They share honestly and openly their struggles in life.

Basic truths such as people are reluctant to change are affirmed during the journey. In reflecting on that reluctance she realizes she was wrong in her marriage to try to force her husband to change. I admire her effort at introspection. With regard to divorce I have found most women and men find it hard to be honest about their own flaws and how they impacted the marriage.

Her emotional journey during the 47 days is encapsulated in the sub-title:

Learning to trust yourself, even after you’ve failed.

While a vibrant confident woman she calls herself a failure after the marital breakup. During her journey she becomes less harsh in her self-assessment.

Amanda is crude at times and constantly profane. She makes no effort to filter the language of her life. Her energy, enthusiasm and openness are daunting and inspiring.

As with most people she despises being judged while judging everyone she meets.

Amanda pulls the reader irresistibly along her journey. She writes vividly and passionately. You want to know what adventure, what sorrow, what joy is on the next page.

While I enjoyed 47 Days it is a book written for women. Amanda writes that men were able, even invited by her, to attend every event. At the same time there is not a reference to a man attending a session. Her father was the one male to have a significant role in the book.


At the end I did wonder what would happen if she made another journey and invited the men of Saskatchewan to come to presentations. Could she facilitate a brotherhood trip? Would men come and be open with each other and with Amanda? She certainly swears enough to put men at ease. I think Amanda has the skills to draw men out.

Amanda has been thinking about the possibilities for men. She said on the Facebook page for Grounded Goodness she can see doing something "about creating spaces for MEN" somewhere down the road.

On the same post she sets out a weekend retreat for men which is being held in early October this fall at Christopher Lake. It will be led by a man.

Do Sisterhoods have to be led by Sisters and Brotherhoods led by brothers? I am sending this review by email to Amanda and asked for her thoughts. If she chooses to reply I will include her response in another post.